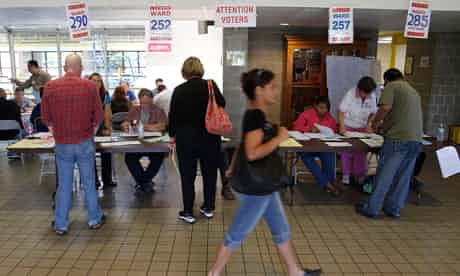 Voters swamped polling stations across the state in what appeared to be a significantly higher turnout than 2010 when Walker defeated Tom Barrett, the Democratic mayor of Milwaukee now vying to replace him.

Local radio reported that parts of Madison, the state capital and a Democratic bastion, recorded turnout of 119% of previously registered voters by 4pm, with four hours of polling still to go. The extraordinary figure was attributed to a late surge in registrations by union and grassroots activists, taking the voter roll far above its previous levels.

However Republican districts, notably the suburbs of Milwaukee, also turned out heavily, reassuring GOP activists that the surge would benefit Walker and confound conventional wisdom that high participation benefits Democrats.

"A high turnout is good for our side," said Brendan Smith, an activist at Republican campaign headquarters in Appleton. "At least we like to think so. In any case we'll be campaigning till the last minute." At mid-afternoon Barrett said he was encouraged by turnout but emphasized the result hung in the balance. "This thing isn't over until 8.01."

Analysts cautioned that early turnout figures did not augur victory for either side but Democrats could not restrain giddiness that perhaps they would defy pre-election polls which showed them losing by three to seven points.

"There is so much energy. It's electric. It's make or break and we believe it will break in our favour," said Ann Muenster, an organiser at Democratic campaign headquarters in Appleton. City clerks said the town could match or even exceed the 2008 presidential election turnout, a trend reported elsewhere.

The Government Accountability Board predicted state-wide turnout of around 65%, well above the first Walker-Barrett contest in 2010 but below the 69% turnout of the 2008 White House vote when Barrack Obama took the state.

With turnout high across the board the result hinged on which areas were highest. For Barrett to win he needed massive turnout not just in Madison but also the counties of Dane, Eua Clair, Milwaukee, Portage and Rock, among others. Walker's survival hinged largely on the Milwaukee suburbs as well as the other Republican heartlands of Greendale, Washington, Ozaukee, Fond du Lac and Waukesha.

If Walker survives it will boost Republican hopes of wresting Wisconsin from Obama in November's presidential election and embolden other Republican governors to confront public sector unions, the issue that triggered the recall.

On the eve of voting Obama tweeted support for Barrett, the Milwaukee mayor who narrowly lost to Walker in 2010's gubernatorial race. "It's Election Day in Wisconsin tomorrow, and I'm standing by Tom Barrett. He'd make an outstanding governor," said the tweet, signed bo, signalling it came personally from the president, not his staff. Opponents mocked the message, pointing out that Obama had kept his distance from the race. "Bold tweet from the President who wouldn't actually campaign with him or step [sic] foot in Wisconsin," tweeted Reince Priebus, chairman of the Republican National Committee.

William Kristol, a conservative commentator at the Weekly Standard, said the president was steering clear from likely defeat. "Obama was so determined to avoid damage to his 'brand' that he didn't show up in Wisconsin to rally the troops in what's likely a losing cause."

But the size of the turnout has confused the pundits. CNN's political reporter Peter Hamby (@PeterHambyCNN) tweeted by mid-afternoon that he was finding nervous Republicans everywhere. Some stations in Milwaukee ran out of voter registration forms and had to send for more. Anecdotal evidence from Racine pointed to long lines in both Democratic and Republican areas with lots of people registering for the first time.

At the Amistad Center in the African American area of Milwaukee, activists for Job America rushed in and out with the names of voters who needed a ride to the polls. Kanbi, who didn't give her surname, said she had mostly been ferrying young, first-time voters who did not know where to go and wanted to help with the process. African Americans were one of the groups who stayed home in 2010 when depressed turnout helped Walker defeat Barrett.

Driving through Uptown she picked up Laquanda Washington, whose street is peppered with boarded up houses and young people lounging in the sun on porches. Washington says she always votes but with her 10-month daughter, who she calls Petunia Pie, in tow she needed a lift. She said she was voting for Barrett because "people just don't have jobs so what are you supposed to do? Welfare's for hard times and a lot of people are going through hard times right now and Walker wants to leave them stranded." At the elementary school where she voted a sign says "Kids Eat Free Summer Meals Here." She was in and out in less than five minutes.

"It was scary," she said. "I usually have to wait and was prepared to wait. But I just went straight through. I hope it's not like that in other places."

follow on twitter
RT @nytimes: A Black professor who studies housing discrimination had his house appraised: $472,000. He then did a “whitewashing experiment…
RT @MCRSociology: Gary Younge discusses identity politics and America with Will Hutton in this episode of @thewesocietypod https://t.co/72…
RT @mart_welton: Congratulations to all those getting their A-level results today. If you have BBB at A-level or above you can still apply…
RT @BernardineEvari: Please follow the groundbreaking online #MuseumofColour UK, founded by the unstoppable Samenua Sesher. The 1st gallery…
RT @EthnicityUK: Gary Younge is interviewed by @sonikkalogan about his work on racism and gun violence in @the_hindu #DataPoint podcast. h…
RT @thefreedomi: 🚨 NEW: Saudi women’s rights activist & academic Salma al-Shehab was sentenced to 34 years in prison + 34 year travel ban f…
RT @LRB: #DawnFosterForever! On Thursday 15 September at the @LRBbookshop, @BizK1, @piercepenniless, Lynsey Hanley and @garyyounge will d…
RT @ShowunmiV: This is how we support Black women and girls https://t.co/8YmgV21zHo
RT @sonikkalogan: It's #DataPoint Pod Thursday! In this week's episode, I talk to @noraneus, @garyyounge and @Casey_J_Wooten about the U.S.…
RT @bgnoiseuk: Next month, @LRBbookshop will host an event to celebrate the life and work of Dawn Foster with @BizK1, @piercepenniless, Lyn…
© Gary Younge. All Rights reserved, site built with tlc
Generic lipitor cost Azilect for sale online Online doctor motegrity How to get a atacand prescription from your doctor Apple cider vinegar and metformin together Cost of cialis at cvs Can i buy estrace online Pradaxa 150 costo Protonix 4 0mg price walmart Where to buy generic aromasin