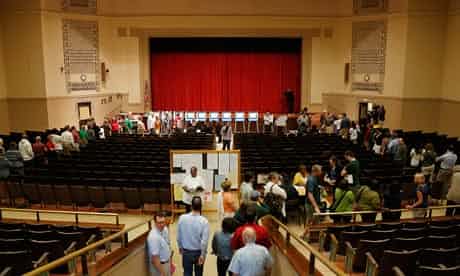 Eighteen months of acrimony that made Wisconsin a national political battleground climaxed on Tuesday as voters lined up from dawn to cast ballots in the recall election.

Polling centres across the state reported lines of people waiting for centres to open at 7am, suggesting a high turnout will decide whether Republican governor Scott Walker keeps his job.

With opinion polls giving him a narrow lead over the Democratic challenger, Tom Barrett, activists from both sides predicted a tight result and threw the last of their energy into herding supporters to the polls.

"When we opened the doors there was already a line of people," said Brenda McCormick, chief inspector of a polling centre in Appleton, traditionally a bellwether town. "Looks like it's going to be a fabulous turnout."

If Walker survives it will boost Republican hopes of wresting Wisconsin from Barrack Obama in November's presidential election and embolden other Republican governors to confront public sector unions, the issue that triggered the recall.

On the eve of voting Obama tweeted support for Barrett, the Milwaukee mayor who narrowly lost to Walker in 2010's gubernatorial race. "It's Election Day in Wisconsin tomorrow, and I'm standing by Tom Barrett. He'd make an outstanding governor," said the tweet, signed "bo", signalling it came personally from the president, not his staff.

Opponents mocked the message, pointing out that Obama had kept his distance from the race. "Bold tweet from the President who wouldn't actually campaign with him or step [sic] foot in Wisconsin," tweeted Reince Priebus, chairman of the Republican National Committee.

William Kristol, a conservative commentator at the Weekly Standard, said the president was steering clear from likely defeat.

"Obama was so determined to avoid damage to his 'brand' that he didn't show up in Wisconsin to rally the troops in what's likely a losing cause."

Barrett supporters casting votes at a converted Methodist church in Appleton voiced fear of defeat. "If the Republicans win today union power will be broken. It'll set precedents for other states to do the same and lead to the demise of the middle class," said James Pfefferle, 66, a teacher at a private school. His wife, who taught at a public school, had retired amid Walker's clashes with unions over collective bargaining and health and pension benefits.

"She had German citizenship and we'll consider moving to Germany, at least for some of the year, if Walker wins," said Pfefferle. "It'll be a low day for Wisconsin if he does."

Walker's supporters were just as passionate in defending a governor whom, they said, had tamed out of control unions and balanced the budget. "He did the right thing and saved our state from disaster," said Toni Murray, 75, a retired office worker. "If he loses, imagine how many other Republican governors will face recalls. We need to stop this."

Wisconsinites are famously polite and civil but almost 500 days of polarisation have taken their toll. Anger on the Democrat side over Walker's policies is matched by Republican indignation at the use of a gubernatorial recall election for only the third time in US history. "I'm here to stop that fuckhead from Milwaukee getting in," said one elderly man, referring to Barrett.

The vote was widely seen as a referendum not just on Walker but the Tea Party-led Republican march since 2010. Most statewide surveys showed an enduring and possibly deepening conservatism, noted Craig Gilbert of the Milwaukee Journal Sentinel.

"Either those polls are true barometers of conservative intensity and are accurately predicting the rightward tilt of the vote Tuesday – or they're oversampling conservatives and overstating Gov Walker's lead."

State officials predicted a turnout above the 50% for the 2010 governor's race but below the 69% for the 2008 presidential race, when almost 3m votes were cast in Wisconsin.

A treasure chest of $31m has let Walker outspend his rival seven to one, swamping the airwaves with commercials, lining motorways with billboards and planting his sign on thousands of lawns. Activists have made around 3m phone calls.

The Democrats are relying on grassroot mobilisation and union organisation. A polling station at the Cesar Chavez center in an ethnically mixed neighbourhood in Racine was doing brisk business by 7.30am. "We voted to recall Walker," says Belinda who voted early. "I'm a union member and I think Walker is against working people and wants to destroy the working class."

Racine is the main town in Racine County. The town is solidly Democratic. The rest of the county is not. The county as a whole tends to swing, generally backing the winner on a state and national level. Walker's opponents are determined but remain sceptical of their chances.

Asked if she thought Barrett might win Belinda sucked in deeply. "Oh God," she said before getting her rationalisation in for probable defeat early. "The Koch brothers [conservative billionaires who have bankrolled the Tea Party] are trying to buy this state. But if we lose we'll keep fighting."

Over at the Martin Luther King Center the polls were less busy but voters were no less determined.

Asked about the issues at stake two women laughed and said: "There was no issue. We need to recall Walker."

At a huge Tea Party rally in rural Racine County small businessman Jon Brocksopp said he felt confident Walker would win because people understood what was at stake.

"If we lose it means the union thugs and power brokers win and no politician is going to want to stand up and take on the tough decisions needed for change. Walker's not an extremist. He's right down the middle."

follow on twitter
RT @nytimes: A Black professor who studies housing discrimination had his house appraised: $472,000. He then did a “whitewashing experiment…
RT @MCRSociology: Gary Younge discusses identity politics and America with Will Hutton in this episode of @thewesocietypod https://t.co/72…
RT @mart_welton: Congratulations to all those getting their A-level results today. If you have BBB at A-level or above you can still apply…
RT @BernardineEvari: Please follow the groundbreaking online #MuseumofColour UK, founded by the unstoppable Samenua Sesher. The 1st gallery…
RT @EthnicityUK: Gary Younge is interviewed by @sonikkalogan about his work on racism and gun violence in @the_hindu #DataPoint podcast. h…
RT @thefreedomi: 🚨 NEW: Saudi women’s rights activist & academic Salma al-Shehab was sentenced to 34 years in prison + 34 year travel ban f…
RT @LRB: #DawnFosterForever! On Thursday 15 September at the @LRBbookshop, @BizK1, @piercepenniless, Lynsey Hanley and @garyyounge will d…
RT @ShowunmiV: This is how we support Black women and girls https://t.co/8YmgV21zHo
RT @sonikkalogan: It's #DataPoint Pod Thursday! In this week's episode, I talk to @noraneus, @garyyounge and @Casey_J_Wooten about the U.S.…
RT @bgnoiseuk: Next month, @LRBbookshop will host an event to celebrate the life and work of Dawn Foster with @BizK1, @piercepenniless, Lyn…
© Gary Younge. All Rights reserved, site built with tlc
Get flonase prescription online Generic vibramycin cost Where can you buy cialis Where to buy zithromax over the counter How to get a atacand prescription from your doctor How much does generic lipitor cost Can you buy xyzal over the counter Pravachol street price Cheap doxazosin Buy real caverta online