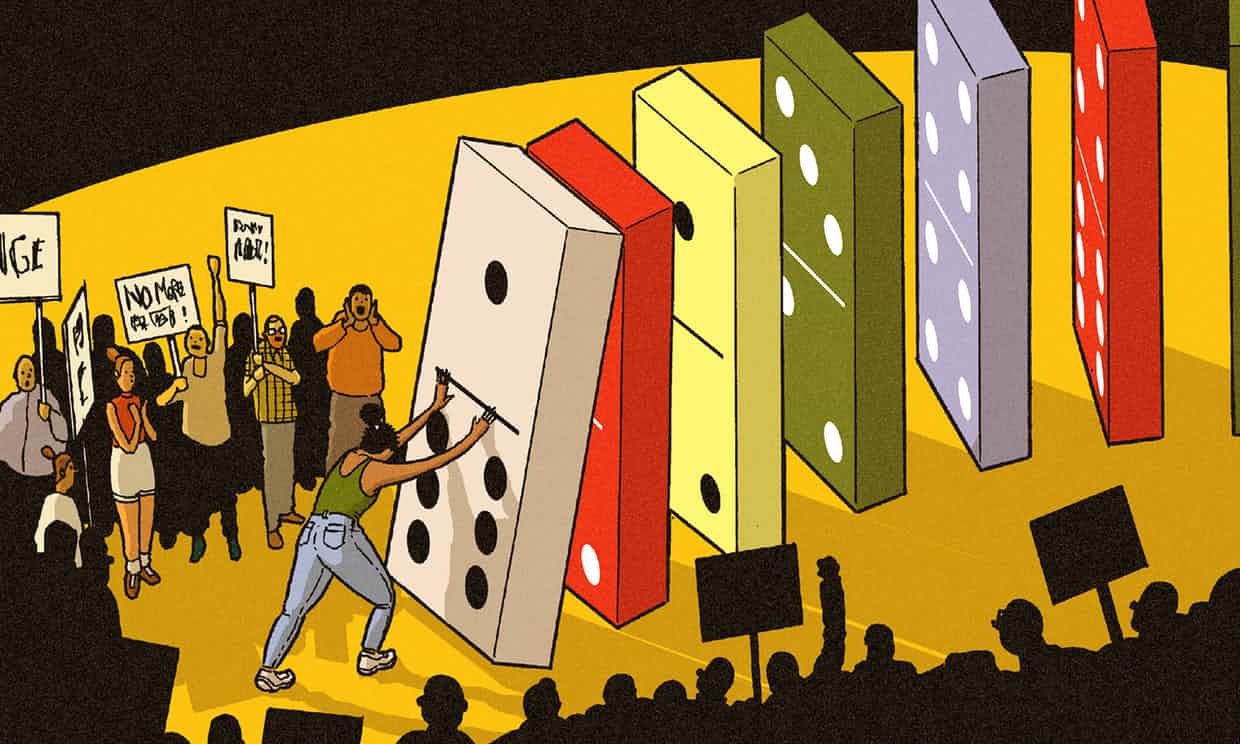 Young people can’t change US gun law alone – but they could tip the balance
The Guardian,
Illustration by R Fresson

In May 1963 a white police officer in Birmingham, Alabama, tried to scare some black children as they went to protest against segregation. As fellow policemen turned hoses and dogs on black youngsters nearby, the kids made it plain they knew what they were doing and continued marching towards the demonstrations. A reporter asked one of them her age. “Six,” she said, as she climbed into the paddy wagon.

Events in Birmingham proved a crucial turning point in the civil rights era. Before protests started, only 4% of Americans regarded the struggle for racial equality as the country’s most pressing issue; after Birmingham, it was more than half.

And young people were crucial to its success. That was no accident. Adult breadwinners had too much to lose, and the campaign was faltering, so Martin Luther King’s organisation trained young people to carry the mantle. Soon they were filling the city’s prison cells. “There were 12 people in [my] jail cell,” Dennis Mallory, who was a teenager in town at the time, told me. “And 11 were from my school.”

The political courage and leadership of the young people in Florida who took on the gun lobby this week stands in the storied, inspiring tradition of youth activism in America and beyond. Whether it was Paris, Mexico or Brazil in 1968, Soweto in 1976, the intifada of the late 80s, Seattle in the 90s, the Prague spring of 1968 or the Arab spring of 2011, the young have often led resistance against injustice or for progressive change – and sometimes both.

In Florida the familiar cycle of carnage, thoughts, prayers, rage and stasis has been broken by an impassioned and uncompromising demand for gun control triggered by the students of Marjory Stoneman Douglas high school, where 17 people were shot dead last week. There have been die-ins outside the White House and school walkouts around the country: they have grilled (and, frankly, toasted) their Republican senator and a spokeswoman for the National Rifle Association (NRA), and lobbied the state legislature.

When liberals see young people challenging authority in this way, they can start to wax romantic. Youth can be fetishised as though it holds intrinsically radical properties. It doesn’t. It is not an abstract identity. Youth interacts with class, race, gender, nationality, region and a range of other factors in different ways at different times. During the 1926 general strike in Britain, students were used as scab labour. Young people, aged 18 to 24, voted for Margaret Thatcher in 1979 and 1983, and Ronald Reagan in 1984. The under-35s in India went for the Hindu nationalist Narendra Modi. Young white people backed Donald Trump.

And while the young can at times make an impact on the streets, they are among the least likely to vote, – if indeed they are even eligible to vote – and cannot withdraw their labour to any devastating effect. There is a limit to what they can achieve alone. In the days after the shooting, Emma González, 17, who was at the school when the shooting happened, emerged as an impressive, articulate champion for gun control, saying: “We are going to be the last mass shooting.” There have been four since their school attack, and at the rate things are going this year the United States is due another school shooting before the end of the month.

But at a moment like this, far more problematic than overstating the impact of young people’s protest is underestimating it. If there is one unifying element in the nature of youth and student protest over the past 50 years, it has been the likelihood of it finding its greatest potency precisely when established political structures have shown themselves to be obsolete – structures young people feel neither beholden to nor indebted to.

Thanks to big money, gerrymandering and spinelessness, each mass shooting is received in a mood of learned hopelessness

There are few better illustrations of this than guns in the US. A consistent majority favours stricter gun laws, and support for background checks is almost unanimous. Yet thanks to a combination of big money, gerrymandering and political spinelessness, each mass shooting is received in a mood of learned hopelessness. Citing Sandy Hook, people understandably insist that if nothing changed when the kids were younger, and the president cried and called for action, then nothing ever will change.

When reporting for my book about all the children and teens shot dead in one random day in America, I asked each family an open-ended question: what did they think had made the tragedy possible? Not one mentioned guns. When I asked the more leading question, of what they thought about guns, most had an opinion: they were too easily accessible. After a while, I concluded that they looked on gun deaths as being a bit like traffic fatalities. If your child was run over by a car, you might call for a traffic light, speed bump or lower speed limit – and no one would claim that was unconstitutional. But you wouldn’t call for an end to traffic. Who could imagine a world without traffic? To these parents, that would be as bizarre as a world without guns.

But González was 12 when Sandy Hook happened. She and her fellow students have not learned to be hopeless. Nobody can tell them to lobby through the proper channels, because there are no working channels. So they have gone for the source. The tone of urgency, rage, hope and mocking disbelief in their resistance is one of the things that has been missing from this debate. America’s rate of gun death – seven children and teens a day, as well as around 80 adults – is an obscenity the nation has become accustomed to.

It is not just the fact of their opposition but the tone that is thrilling. “Calling BS” on the political class and the NRA, facing down senators and lobbyists, they have acted independently of both political parties and a mostly white, middle-aged, suburban-led gun control movement that has little connection with the communities most acutely affected by gun violence.

This is fantastic, as far as it goes, but on its own it doesn’t go far enough. History has shown that young people and students have the ability to expose a crisis and challenge it, but rarely defeat or solve it unilaterally. They are more likely to be the spark for the broader struggles than the flame itself. The systemic threat youth and students pose is one of contagion – that their energy and commitment will infect others with more leverage, who may join them.

Of the victory against segregation in Birmingham, the historian Taylor Branch wrote: “Never before was a country transformed, arguably redeemed, by the active moral witness of schoolchildren.” That may have been the first time. Let’s hope it is not the last.

follow on twitter
During lockdown some people learned to bake sourdough. My partner, who sings in @londonoriana , took up composing.… https://t.co/LPViWc7Jof
"I was the only kid of colour on the track. And I’d be getting pushed around. But then I could always turn their en… https://t.co/R5JlNovOgH
RT @SimonFRCox: “I feel like I was built for this.” ICYMI ⁦@LewisHamilton⁩ talking to ⁦@garyyounge⁩ - 2 Black men from pretty white Stevena…
RT @HowToBe247: 📚 Author interview Veteran journalist and Why Are We? author @garyyounge talks about how #identity #politics terms are use…
RT @HowToBe247: NEW PODCAST EPISODE! Honoured to have spoken to veteran journalist, sociology professor and Who Are We? author @garyyoung…
RT @williamcson: it would be wise to not wait for an imagined announcement declaring “fascism is here.”
RT @Emmajourno: I'm looking into the impact of health visitor shortages on children and families. So a) any HVs happy to talk to me about t…
RT @DoubleDownNews: The Irony Roll back of reproductive rights under pro-life & easy access to lethal weapons, advocated by same people T…
“Boris Johnson has clearly decided that if he’s going down he’s taking the country with him.” My piece @thenation https://t.co/ZZoRdcTVRo
RT @hughlaurie: I don’t know enough about the rail dispute. I only observe that RMT’s Mick Lynch cleaned up every single media picador who…
© Gary Younge. All Rights reserved, site built with tlc