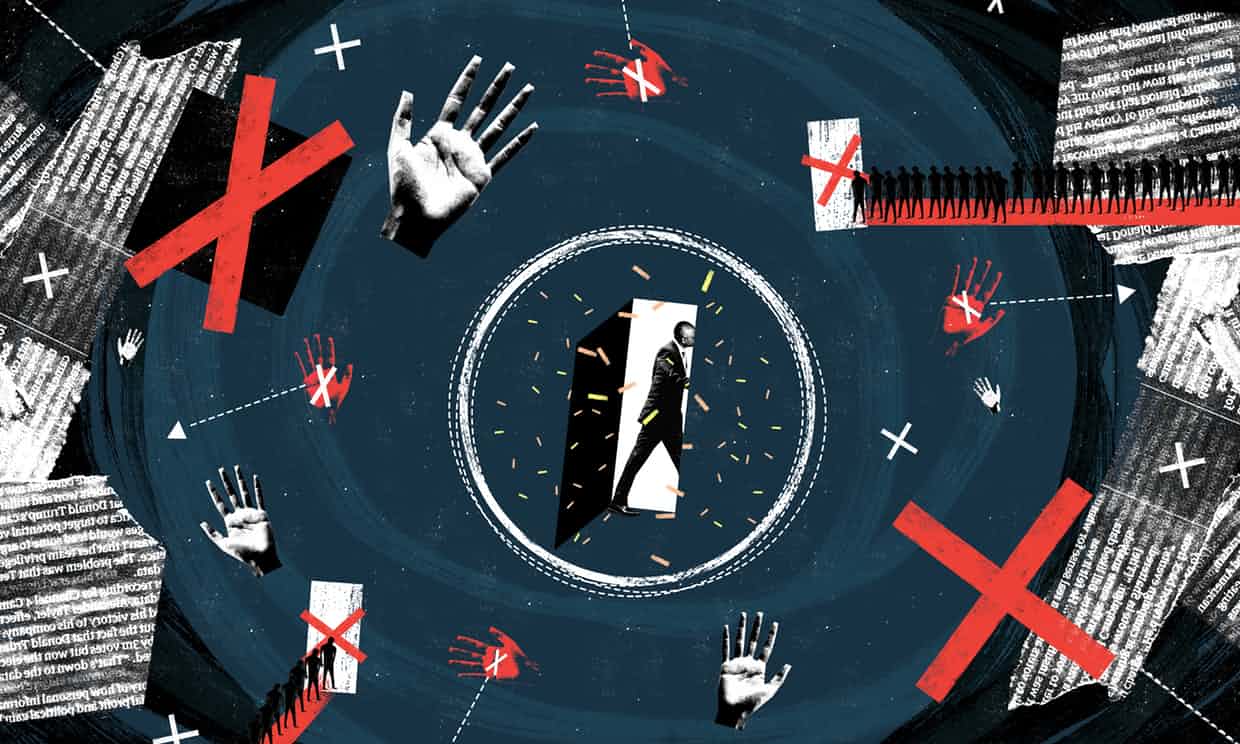 Diversity should be about change. Not looking different and acting the same
The Guardian,
Illustration by Nate Kitch

Sajid Javid’s father, Abdul, came to Britain from Pakistan with a pound in his pocket and became a bus driver in Rochdale. As a six-year-old, Sajid used to interpret for his mother, Zubaid, who took 10 years to learn English. At one stage Sajid shared a room with his parents in a two-bedroom house where he lived with his four brothers. His school careers adviser told him to be a TV repair man since children like him should not aim too high. Instead he was the first in his family to go to university, became the youngest ever vice-president at Chase Manhattan bank and then went on to become a board member of Deutsche Bank before entering parliament in 2010.

We know this because Javid often evokes his personal story, as any skilled politician might, for effect. Monday, when he replaced Amber Rudd as home secretary, was no different. On his first day on the job, Javid insisted that the Windrush scandal was to him not just political, but personal. “Like the Caribbean Windrush generation, my parents came to this country from the Commonwealth in the 1960s,” he said. “So when I heard that people who are outstanding pillars of their community were being impacted simply for not having the right documents to prove their legal status in the UK, I thought it could be my mum, my brother, my uncle – even me.”

But, for all the talk about how Javid’s elevation should be celebrated as evidence of a government broadening its pool of talent at the highest level, the truth is that, were it up to the policies of this government, there would be no Javid. His father would never have been allowed in. And Javid’s OK with that. “It’s absolutely right that today we should have an immigration policy based more on skills,” he told the Telegraph three years ago.

If ever there was an illustration of the distinction between the symbolic value of representation and the substantial need to redress systemic inequality, it is this: a man who extols his own story as an example of what is possible, even as he actively seeks to ensure that this story should be denied to those who come after him. To those who see diversity as an end in itself, rather than a means of securing greater equality and less discrimination, Javid’s promotion denotes meaningful progress. That is the sloppy liberal thinking on which rightwing opportunism thrives, and which Angela Davis once described to me as “the difference that brings no difference and the change that brings no change”. Symbols should not be mistaken for substance, lest we end up not with equal opportunities for many, but photo opportunities for a few.

But they should not be dismissed as entirely insubstantial either. In a cabinet where there are more former Oxford Union presidents than there are minorities, it matters that the state school-educated son of Pakistani migrants has a top job that covers policing, immigration and security. He brings a set of experiences, from discrimination to family poverty, that are lacking in the highest levels of government.

The fact that he is a millionaire and a Tory does not insulate him from racism. On the Guido Fawkes website, a Conservative site where bigots go to reinforce their rage, his appointment was greeted with the following comments: “It rather appears the white man’s burden has moved in with us for good”; “He’s looking forward to being joined by millions of others from Turkey”; and “Never trust an Arab.” (Let’s forget that Pakistan is not in the Arab world and further from Turkey than Britain.)

A few, accusing him of racial treachery, called him a “coconut” (black on the outside, white on the inside) and a token. That is offensive. His race does not define him. Who we are does not determine what we do or what we think. There is nothing intrinsic about being of Pakistani origin that prevents someone becoming a Conservative.

So there is symbolic value to his appointment. But unlike the comedian George Carlin, I think symbols are far too important to be left to the symbol-minded. Symbolic advances are far more limited and contingent than their advocates generally admit. The first black leader of a significant political party in the Netherlands was Joao Varela, a migrant who briefly headed Pim Fortuyn’s anti-immigration party after Fortuyn was assassinated. The French far right Front National has black supporters and had a handful of non-white representatives; Ben Carson, the housing and urban development secretary under Donald Trump, last year referred to slaves as immigrants. Should we claim the advances of all these people as victories for diversity? If not then, clearly, we have to be careful about what symbols we are promoting.

I’m delighted for Meghan Markle and her upcoming nuptials with Prince Harry. But those who claim it marks a step forward for black people in Britain fail to engage with the symbol in question. A royal family establishes inherited privilege at the heart of our system of government and embeds patronage at the centre of our politics. The prospect of a black princess illustrates that black people can now be as elitist, exclusory and hierarchical as whites, and that white elites are prepared to accept them on those terms.

Which brings us back to Javid, who comes not only with an ethnicity but a record. He has consistently voted for tougher immigration and asylum laws, including the “hostile environment” policy, and for slashing benefits to the poor. There is no evidence that he has ever leveraged his experiences as the child of working-class migrants to do anything positive for migrants, their children or the working class (British-Pakistanis have among the highest rates of unemployment and poverty). He recognises that those threatened with deportation could have been his parents; he fails to acknowledge that he voted for the very policies that would have facilitated their removal and, unless he changes the policy, could be their deporter.

The Windrush scandal has perfectly illustrated that racism is not simply a matter of mean-spirited individuals doing bad things – though it can be that too – but a system that excludes and marginalises people of colour. The point is not to change the identities of the people operating that system, but to dismantle it and build something fairer. When diversity is about a system looking different but acting the same, it serves not the excluded but the system itself.

It is clear what this promotion does for Javid; I have yet to hear a convincing case for what it might do for people who look like him or share his background. Javid may have broken through the glass ceiling, but it’s difficult to see what use that is to those trapped in the basement. Especially when he keeps disabling the lift.