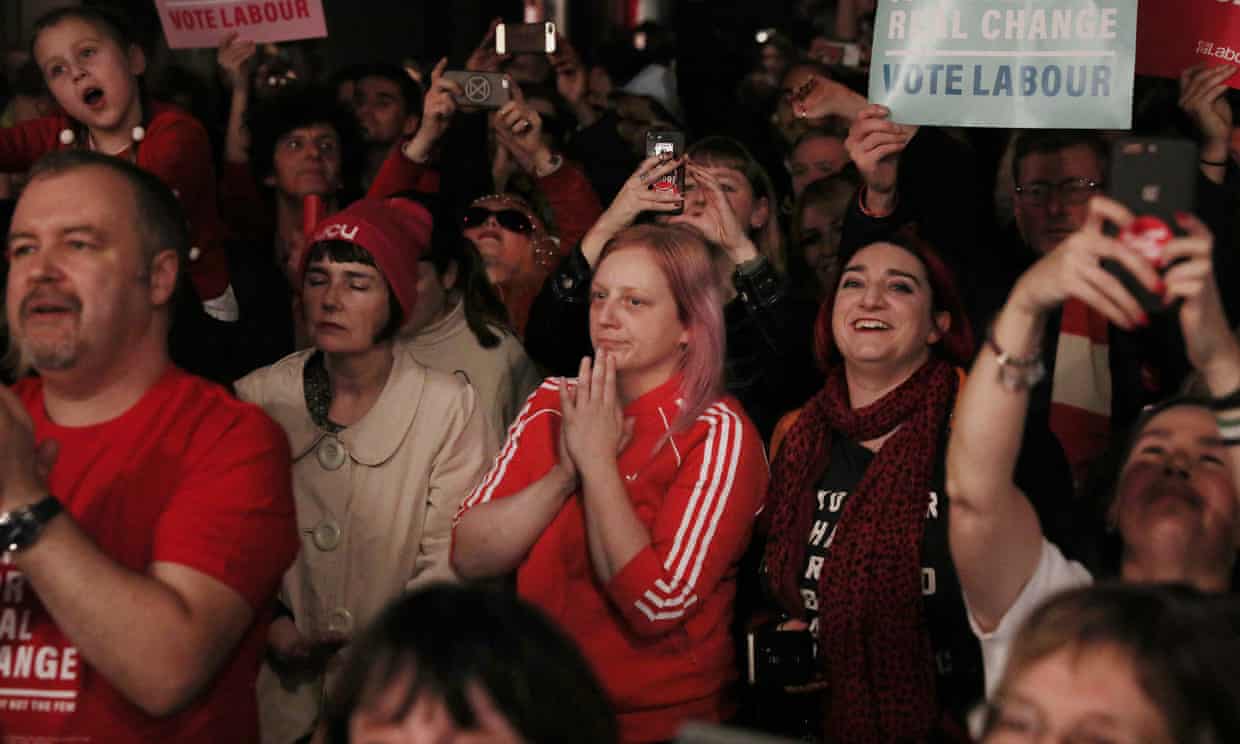 Amid defeat, remember – the left is more than Labour
The Guardian,
Photograph: Dan Kitwood/Getty Images

During a deputation to the White House by civil rights leaders in 1963, President John F Kennedy was asked whether he supported the March on Washington, at which Martin Luther King made his “I have a dream” speech. Kennedy said he didn’t. “We want success in Congress, not just a big show at the Capitol … It seemed to me a great mistake to announce a march on Washington before the bill was even in committee.”

It took the trade union leader, and elder African American in the room, A Philip Randolph, to push back. “The Negroes are already in the streets. It is very likely impossible to get them off,” he said. Kennedy was wrong – ultimately “the big show at the Capitol” was central to the success of the civil rights bill in Congress. Without the pressure from below, there would have been no change from the top.

The tension between the electoral and the political, the social movement and the legislative process, is an inevitable feature of left politics. Progressive change is ultimately enacted through parliament, but it rarely begins there. Sometimes movements produce parties. The Labour party was created by the labour movement, just as Podemos in Spain was created by the indignados and Green parties emerged from the ecology movement. Sometimes, like the suffragettes, the civil rights movement or the gay rights movements, parties absorb movements. Either way, they find a pathway from the streets to parliament.

As the left reflects on its priorities over the next few years, it is worth reassessing whether we have the balance right. Contrary to Tony Blair’s claim that the left turned Labour into a “glorified protest movement”, Labour actually turned the left into a glorified electoral machine. The thousands of people who canvassed in the cold and half-light over the past month were not there to wave placards in central London and preach to the converted, but to knock on doors in marginal constituencies and convert the waverers.

A friend who went from Hackney to Milton Keynes, where the Tories held a slender majority, shared his diary entry of election day. “We walked (and sometimes ran) in the freezing rain from house to house to get the vote out. But we were often met on the doorstep with bitterness, a hardness that was brittle like a body that’s turned inwards, tight and hunched-over against the cold and wet.”

Despite all its effort, that machine evidently didn’t work. We lost, and lost badly. The Tories increased their majorities in both Milton Keynes constituencies. But that doesn’t mean we didn’t exist or make any difference. Those majorities are still lower now than they were in 2015. For the past four years, the left has spent almost all its energy defending and advancing the gains it has made within Labour. That has made sense. Corbyn was propelled to the leadership not by an organised base of activists but by an inchoate sense of frustration and alienation. He landed amid a hostile parliamentary party, leaving him besieged and isolated. Momentum did not make his leadership possible; his leadership made Momentum necessary. It has since galvanised people very effectively on a local and national level.

A lot of important things came from that. The advances in vote share and seats in 2017 on a radical and redistributive agenda, a party that doubled in size, a leadership race with a potentially impressive range of candidates in which the battle against austerity and for greater equality mainstream rather than marginal.

But I wonder if that strategy makes sense for the next four years. My point here is not that the left should abandon its activism in the party, but that it might want to consider significantly shifting the balance of its energies beyond it. Elections are important. But there is more to politics than elections, and more to power than parliament. Nigel Farage never came close to winning election to the UK parliament: more people voted for Diane Abbott last week than have ever voted for Farage in his seven attempts to become an MP over a quarter of a century. But he has managed to upend our politics and effectively take over the Tory party.

There is also more to the left than Labour, and more to Labour than the left. The aim isn’t to abdicate influence but to more efficiently apply it. In a moment when we can expect a significant attack on living standards, workers’ rights, public services, environmental protection and minorities – because that is what happens when Tories win big – the left might focus more on local and national campaigns than holding positions and passing resolutions.

So much time has, understandably, been spent examining Corbyn’s unpopularity that we forget that Boris Johnson was the one who was booed and heckled in the street and hospitals during the campaign, and mocked when he said he was trustworthy. The fact that he has a huge majority now does not mean he is not politically vulnerable. It took him less than a week to abandon his commitments to raising the minimum wage, to protecting labour laws and child refugees, and to launch an assault on voter rights with an ID bill that will suppress the vote of the poor and minorities. There is no shortage of issues for the left to get involved in beyond Labour. The Earth certainly can’t wait until 2024.

Out in Milton Keynes my friend could feel it slipping away on the day. “With every listed Labour voter that told us ‘I won’t vote for you’ we could tell this was not going to be swinging our way,” he wrote. “Some wards were warmer and our spirits rose – but in truth it was tough, and soon the conversations amongst us started to be about after the election – how we might retain this spirit, this collective energy.”

In the midst of dejection and the wake of this defeat, that is the key question for the left. We lost an election; we did not lose everything. How do we make sense of what we still have, and move on?

follow on twitter
RT @WeAreWhisperTV: The Talk is up for Best Documentary! Short listed TWICE @BroadcastAwards (+ Best Lockdown) Co-prod with @CardiffProds…
Forensic. Sharp. Devastating. A brilliant piece by @chakrabortty illustrating how the authors of the race report ha… https://t.co/xwz7BpvAlB
@HimesWise @joe_hill Thanks. I know. Unfortunately predictive text did not attend that lesson. So here we are.
RT @MCRSociology: ‘What the Hell Can I Call Myself Except British?’ @garyyounge on Steve McQueen's #SmallAxe series in @nybooks https://t.c…
RT @arusbridger: Very few companies - let alone newspapers - last 200 years. I'm exploring the Guardian's long & distinguished history at t…
RT @omid9: I believe a local criminal gang stole my car. I have, of course, now asked the leader of that gang to conduct an inquiry. https…
RT @MichaelRosenYes: I'm delighted to see that my book 'The Missing' is up for an award. It's about how I discovered that my father's relat…
RT @MartinDoyleIT: Happy birthday, Samuel Beckett. This never gets old https://t.co/RXtd6QkwaL
RT @MCRSociology: Congratulations to @garyyounge who has been longlisted for @theorwellprize for Journalism 2021 1/4 https://t.co/NkGiTfg5…
Solidarity with All the Gary’s out there https://t.co/1L5mmzJ3JB
© Gary Younge. All Rights reserved, site built with tlc