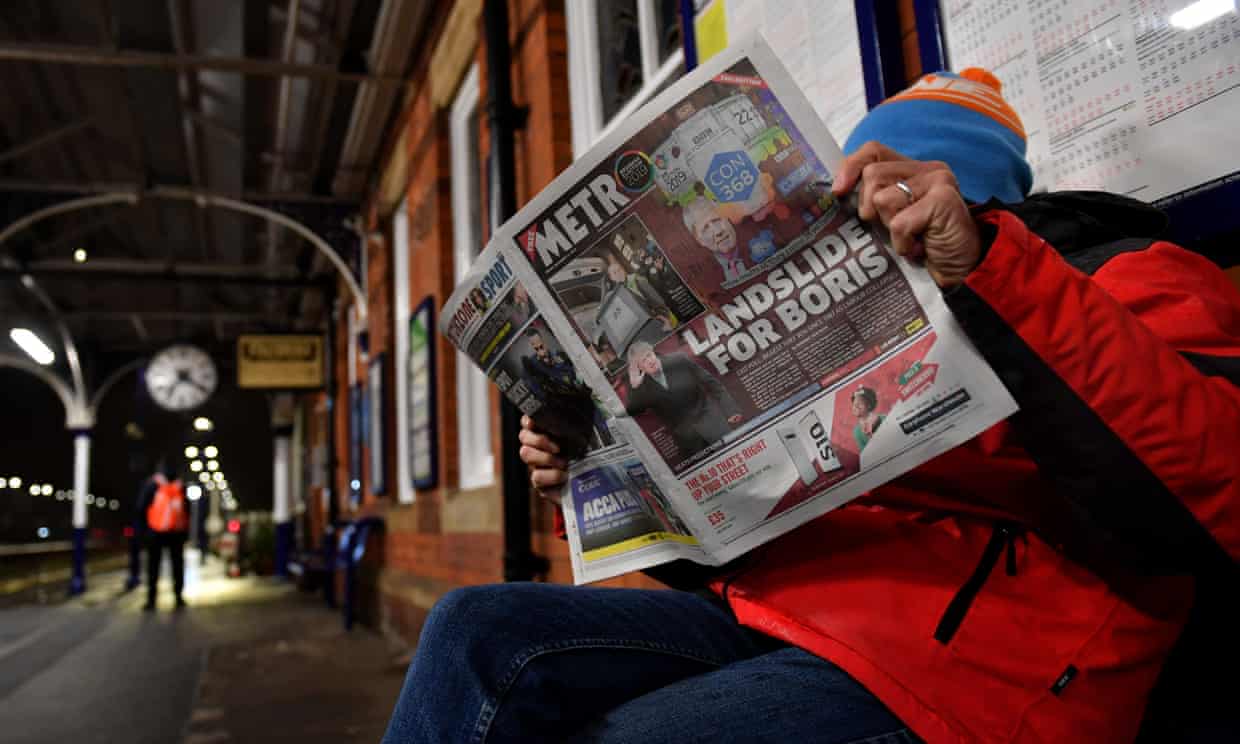 Labour won’t win again until it works out why it lost
The Guardian,
Photograph: Anthony Devlin/Getty Images

This changes everything. The fourth national vote in four years has broken the parliamentary logjam with devastating effect. It was a rout. Labour’s vote in its traditional strongholds finally collapsed. The demographic, geographic and social ties that bound its coalition together have unravelled. We have yet to see if they can be put back together again. Britain has elected the most rightwing government for decades, handing the least principled leader in living memory such a massive majority that it could take a decade to get rid of him. Last night was bad. The worst is yet to come.

The left must now find the space to grieve and think simultaneously. Because it’s not about us. It’s about the more hopeful society we want to create, the people we want to create it with, and the dystopia that the Tories are in the process of creating. And we won’t be in a position to win again until we work out why we lost. The easiest answers here are also the least adequate. To blame it all on Jeremy Corbyn, Brexit, the media, the manifesto or a failure of tactical voting is to deny a bigger, more complex picture. Of course Brexit played a significant role. Labour had three years to come up with a coherent offer to counter Tory bluster and failed. Given that its biggest losses were in leave areas, the notion that it should have cast itself as an unequivocal party of remain and a second referendum makes no sense. That certainly didn’t do the Liberal Democrats any good.

Labour knew Brexit would dominate and aimed to shift the conversation to public services and the environment. It failed there too. The problem was not the manifesto. Labour’s plans for nationalisation, public spending and wealth redistribution were popular, achievable, and would not have left Britain in a radically different place from many other European nations. But if you’re going to promise something that ambitious, you have to first of all prepare people politically for it and then reassure them you can actually do it. Labour did neither effectively, instead promising more things each day, displaying a lack of message discipline that felt like a metaphor for potential lack of fiscal discipline.

Corbyn was deeply unpopular. On the doorstep most couldn’t really say why they didn’t like him. They just didn’t. Some either thought he was too leftwing, antisemitic or the friend of terrorists. Obviously the media, which did not come out of this election well at all, have a lot to do with that. How could you like someone when you never hear anything good about them? The rightwing-dominated press too often framed the narratives for television and radio, which fed them back on a loop that could be broken only by events.

But they did not invent it all. Corbyn was a poor performer. Time and again he had chances to nail Boris Johnson for his lies and duplicity, but he refused to do so. He’d say it’s not his style. But his style wasn’t working. His refusal to apologise to the Jewish community for antisemitism when interviewed by Andrew Neil was baffling, not least because he had apologised several times before – and did so again afterwards with Phillip Schofield. And the media are not going anywhere soon. They attacked Gordon Brown, Edward Miliband and Neil Kinnock too – though never as ferociously – and whoever runs the party next will have to deal with them.

Those who think that Labour’s leftward shift was just about Corbyn frankly never understood it. Corbyn was simply the unlikely, unprepared and in many ways inadequate vessel for a political moment that is not yet over. He emerged in the wake of wars and at a time of austerity when social democratic parties across the western world were failing and flailing. His election did not produce the crisis in the Labour party; it was the product of it, and this election result has now exacerbated it. His strong performance in 2017 is why we are not further down the Brexit path already, and why the Tories have promised to increase public spending and effectively end austerity.

There are ways of contextualising this result that could provide solace in a moment of despair. Labour, under Corbyn, won a higher vote share than both Miliband and Brown. He lost fewer seats than Brown and has more than the Tories did in 2005, from which they bounced back to form a coalition government in 2010. Such rationalisations should be avoided. We lost, and lost badly. Self–criticism does not come easy from a defensive crouch. In the words of the great African American writer and activist WEB Du Bois: “Our worst side has been so shamelessly emphasised that we are denying we have or ever had a worst side. In all sorts of ways we are hemmed in.”

Corbyn is right to announce his departure. His decision to stay and lead a discussion about the future of the party makes no sense. He cannot lead a conversation that is in no small part about him. His presence will be a diversion from the task at hand. The left should not fetishise this position. It matters who runs the Labour party, but it’s not the only thing that matters. For the past four years nearly all of the left’s energy has been poured into defending it. Given Johnson’s majority, many of the key struggles to come will take place outside parliament.

Corbyn’s departure creates a problem for centrists. They have been predicting this moment since before he was elected leader. When events failed to comply – when the party reelected him with a greater majority or the country gave him more seats and votes – they waited for the next event. Even a broken clock is right twice a day. The trouble is, with him leaving they will now have to produce an agenda and a candidate of their own, and then offer those up to a party that has grown in size, even if it is momentarily diminished in confidence.

They will have to face the fact that the electorate did not abandon Labour for the centre. They went either to the far right, in England and Wales, or to the social democratic nationalist alternative, in Scotland. They did not go to the Liberal Democrats or back Change UK. Chuka Umunna, Dominic Grieve, David Gauke, Anna Soubry, Jo Swinson and Luciana Berger all lost.

I did not hear a single voter ask about Owen Smith or pine for Yvette Cooper. Whatever comes next, it won’t be a return to abstaining on the welfare bill or backing the hostile environment policy. They will want Labour to be more effective in opposition, but they will want it to mount an opposition.

The centrists will have to face the fact that the thousands of people who travelled the country during these past few weeks to canvass in the cold and rain are not about to abandon their ideals or the party. And those who invested so heavily in this particular iteration of Labour will have to face the fact that their conviction alone was not enough to convince others of their ideals.