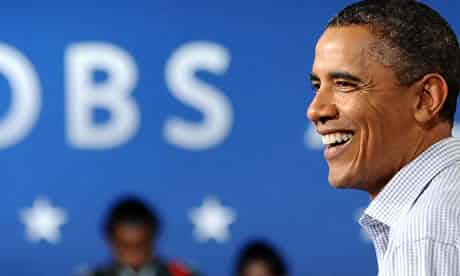 Barack Obama has often been lucky with his enemies. During his senatorial primary campaign in Illinois in 2004 the campaign of his most-feared opponent imploded spectacularly just a few weeks before polling day. Unsealed divorce papers revealed that Blair Hull's former wife had detailed several allegations of verbal and physical abuse. His ex asked for a restraining order because Hull had threatened to kill her. In a field of eight, Obama won 53% of the vote.

In the general election that year, Republican candidate Jack Ryan seemed like a viable challenger for the senate seat until his divorce papers were also unsealed. Ryan, it was alleged, had pressured his ex, Jeri, to go to clubs where people had sex in public. One had "cages, whips and other apparatus hanging from the ceiling"; another had mattresses in cubicles. It did not help that Jeri was a TV star who had worn tight-fitting body suits on Star Trek. Denying the allegations, Ryan nevertheless dropped out, in June. Five months before the election Obama had no opponent.

Hillary Clinton's 2008 campaign was far less than the sum of its parts; John McCain chose Sarah Palin as his running mate, a hail mary pass that went seriously awry.

Now, as he heads for reelection, he must be saying a prayer every day in thanks for Mitt Romney. The problem with the former Massachusetts governor is not sex and aggression in the home but a lack of passion and affection on the stump. For in the former Massachusetts governor the Republican party has found the worst of all worlds: a candidate feasible enough to represent their best hope and yet insufficiently appealing to be able to leverage that feasibility into electoral capital. Since Iowa, his nomination has seemed as inevitable as his candidacy was vulnerable. http://www.theguardian.com/commentisfree/cifamerica/2012/jan/04/rick-santorum-iowa-mitt-romney. It can't get any worse than a presumptive nominee whose nomination seems presumptuous.

Even the people who vote for him don't really like him. According to a CNN poll, more than a third of those who backed him in Florida said they were not satisfied with the candidates on offer; higher than any other candidate.
For a while this didn't seem to matter. Romney was winning by default.

While there has never been a moment when his frontrunner status has not faced a challenge, the challengers – from Donald Trump to Herman Cain – were scarcely plausible. Their rise was a thing of intrigue. Things to be parsed for deeper meaning about the mindset of the base rather than propositions to be taken seriously. Romney would be the nominee; the rest was just process. What Romney could not fix, money would, and if money were not enough then common sense would do the rest.

But increasingly the process – ie voting – has proved stubborn. For the first time in over a year there is a serious chance that Romney's candidacy might actually run aground. The decisive moment is nigh. Next week in Michigan could mark the point at which the Republican hierarchy has to seriously consider an alternative storyline because the base has lost the plot, the sub-plot, the chapter headings and jettisoned the main characters.

Michigan is not just a state Romney should win. It's a state he has no business losing. It's the state where he was born. His father was governor there. He won it last time. He is outspending Rick Santorum there by three to one. It shouldn't even be close. Yet for the past couple weeks he has been trailing Rick Santorum in every poll there (although the race has started to tighten). If Romney wins Michigan, he lives to limp another day. If he loses, from that point on all talk will shift irrevocably from inevitability to liability. And as Hillary Clinton can testify, once inevitability has gone it's difficult to get back.

This is not just a problem in the primaries. The harder Romney has had to come down on his opponents, the more he has scared off independent voters. "Romney went into this campaign offering Republican activists little more than the promise that he would be the strongest candidate against Obama," writes Walter Shapiro in The New Republic. "But as Romney's scorched-earth campaign tactics drive down his general-election poll numbers and his campaign-trail awkwardness jeopardizes his argument for electability, he is left without a rationale for his candidacy. If Republicans don't feel good about Romney and don't think he will win in November, then why would they vote for him in the primaries?"

The principal beneficiary of Romney's decline would not be Santorum. His victory would simply give raw percentages to a fact long established: that Republicans are not happy with the choices they have and are still shopping around. In all likelihood, Romney's defeat will prompt more feverish talk about drafting a candidate – Mitch Daniels, Marco Rubio, Jeb Bush – who can intervene at the 11th hour to rescue the party. "Republicans are fretting the four dancing now can't beat Obama in the fall," the Indiana GOP chairman, Eric Holcomb, , told Politico recently. "So their national talent search continues." It's unlikely that any of them would enter at this late stage or that they would fare much better even if they did. (Remember the excitement around Rick Perry?).

The principal beneficiary would be Obama. The president should be fighting for his life. Instead, he's living on his luck.