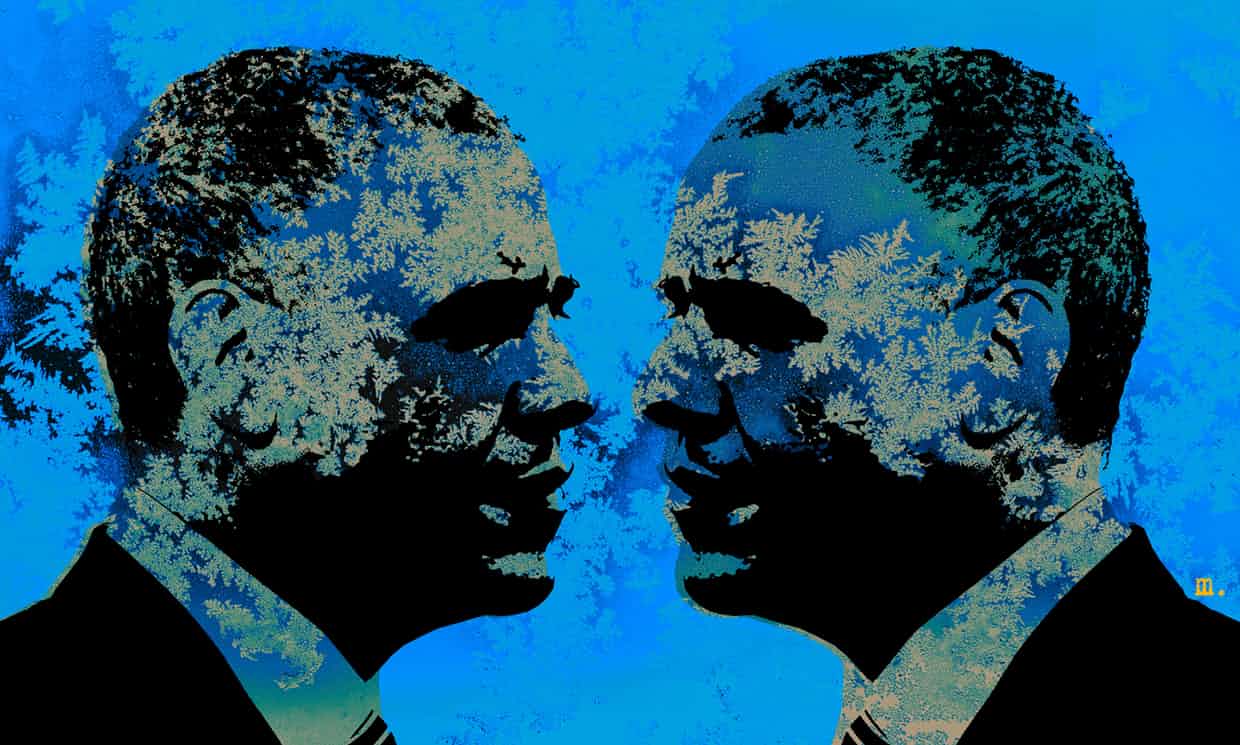 Being a black man in white America: a burden even Obama couldn't escape
The Guardian,
Illustration: Joe Magee

In his 2014 grand jury testimony over the shooting of 18-year-old Michael Brown in Ferguson, Missouri, police officer Darren Wilson described Brown less like a human being than a possessed animal. “He looked up at me and had the most intense aggressive face. The only way I can describe it, it looks like a demon, that’s how angry he looked.”

The image he conjured of Brown, even after he shot him, was of a man both physically superhuman and emotionally subhuman. “He was almost bulking up to run through the shots, like it was making him mad that I’m shooting him. And the face that he had was looking straight through me, like I wasn’t even there, I wasn’t even anything in his way.”

The black American male in the white American gaze has long been an object of fear: excessively sexual, insufficiently cerebral, physically imposing, instinctively criminal. It’s no mystery where these assumptions came from: if you enslave people, break up their families, humiliate, brutalize and denigrate them and spend far more on their incarceration than their education, then the mere prospect of them reaching their full human potential will strike fear in you.

Barack Obama hoped his presidency would shift the dial in this regard. When he was trying to persuade his skeptical wife about what could be achieved by becoming president, he said: “The day I take the oath of office the world will look at us differently. And millions of kids across this country will look at themselves differently. That alone is something.”

When it comes to black masculinity in particular, the world has certainly seen something new these past eight years. The most prominent black man in the world is a nurturing father and dutiful, faithful husband, who is intelligent, measured and even-tempered. His successor is a self-proclaimed sexual harasser given to impulsive flashes of anger, with five children from three different women.

If you want to know what white male privilege looks like, then take a look at the podium on inauguration day. No black man could be elected with Trump’s life story (what levels of personal propriety a black woman would have to attain to be taken seriously don’t bear thinking about). 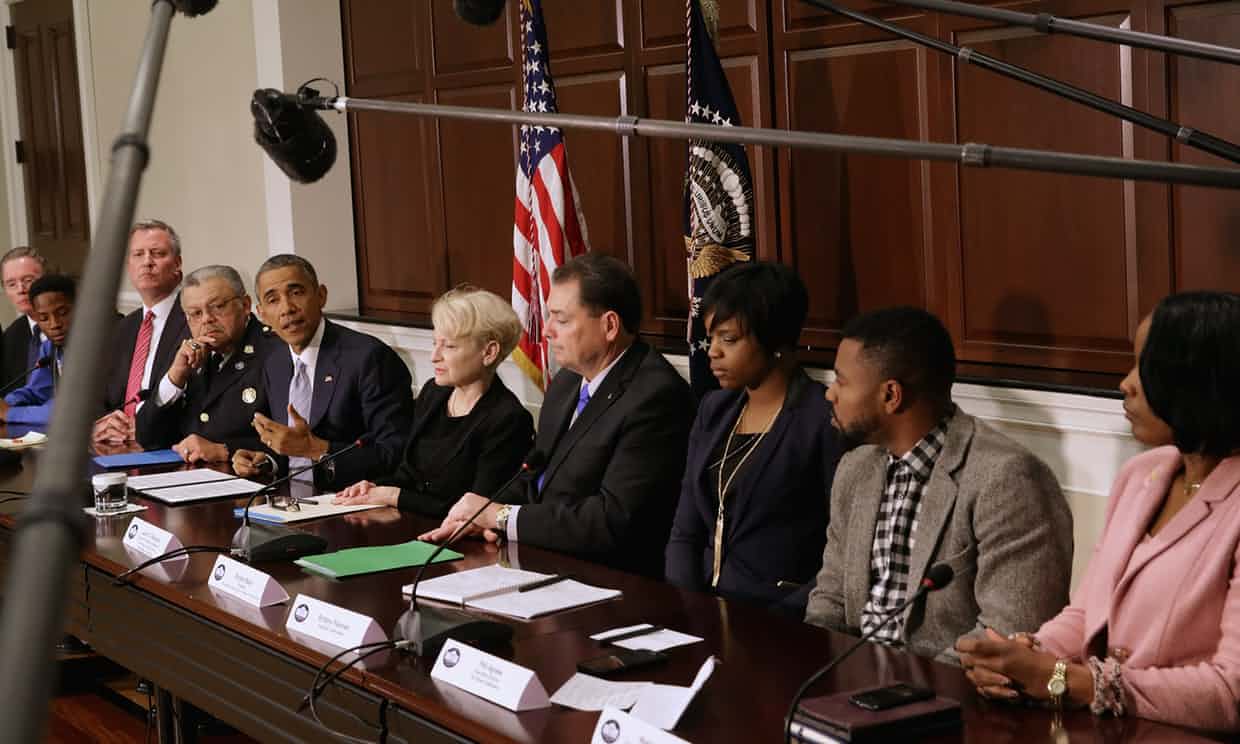 Barack Obama at a meeting on building trust between communities and law enforcement in the wake of the Michael Brown shooting. Photograph: Chip Somodevilla/Getty Images

Far from the pathologies routinely assumed to be inherent in the black male condition – rage, impetuousity, venality – Obama rarely displayed much in the way of fury. Often negotiating with himself before he negotiated with others, he was serene to a fault, even when openly and brazenly disrespected by those facing him – from Israeli prime minister Benjamin Netanyahu to his congressional opponents.

In fact, many wished he did a better job of giving voice to the frustration that Congress was failing to do the work of the country. “You get the sense that this president, while intellectually engaged, is not emotionally engaged with what the American people are going through,” Michael Fletcher, the Washington Post’s former economics correspondent, told me in 2011. “People want to feel there’s someone out there fighting their corner even if that person doesn’t win.” This would appear to be more consistent with his actual personality than any calculation about what a black male in public office could or couldn’t do.

Often negotiating with himself before he negotiated with others, he was serene to a fault

Paradoxically, pointed out Salim Muwakkil, a Chicago-based journalist and activist who has seen Obama develop politically long before he was nationally renowned, his style arguably conforms to another black male stereotype. “It’s like the pimp from Iceberg Slim,” he told me. “The guy who was not perturbed by anything. Murders would happen in his vicinity and he’d carry on as if nothing happened. He brought that sensibility to the office in a way that others haven’t. It’s ironic especially now people are urging him to warm up, to leave that icy demeanor behind, to become that angry black man – that other stereotype. I don’t think he can escape these stereotype expectations.”

The irony goes deeper when one considers that, as president, Obama was responsible for far more murders of innocent people through drone strikes than Biggie or Tupac ever could have been during the east and west coast rap feuds.

But the fact that Americans have seen something new in the White House doesn’t mean that what they are seeing is actually new in terms of black masculinity, or that they necessarily see black men differently as a result. The stereotypes that Obama has been ostensibly defying were always just that: stereotypes. 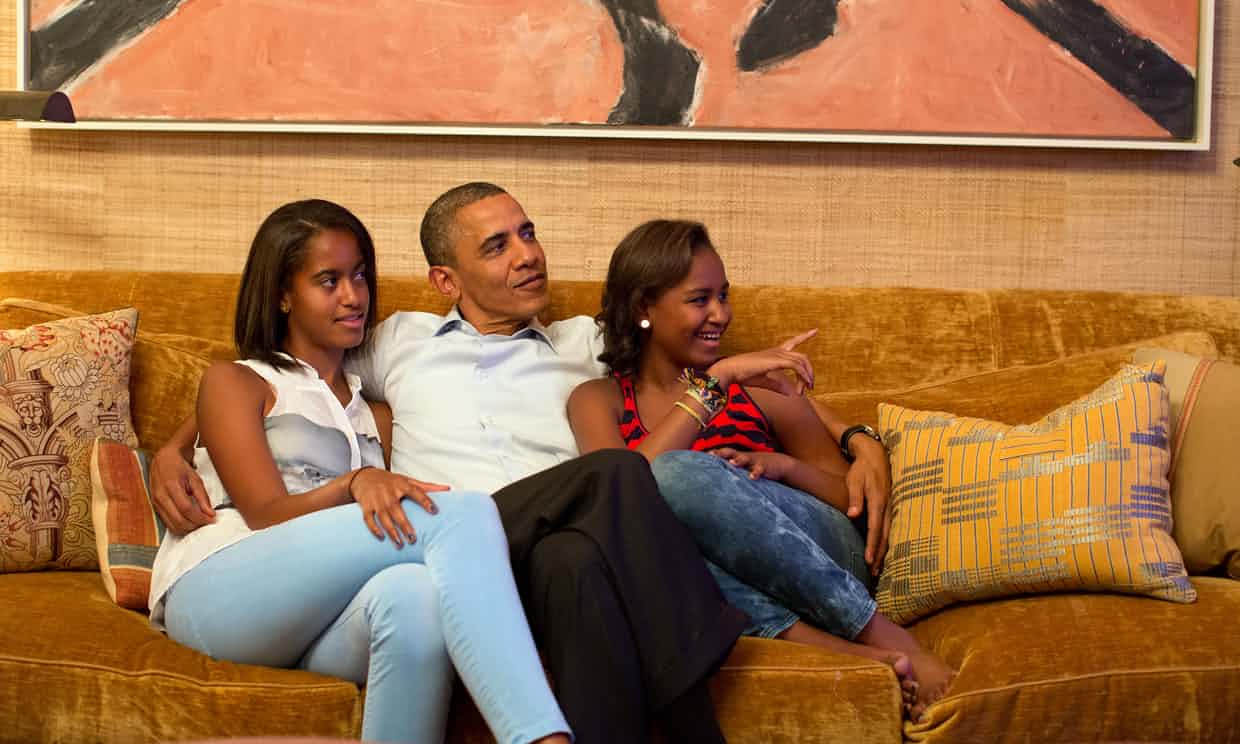 It is true that black people are less likely to marry than whites and black men are less likely to live with their partners. But according to the National Center for Health Statistics, when children are under five, black fathers are more likely to feed or eat meals with them, bathe, diaper or dress them, and read to them daily than fathers in any other racial group, whether they live with them or not. As their children get older, black fathers are more likely to take children to and from activities daily, talk to them about their day and help them with their homework. Black men are also disproportionately likely to be single parents than other racial groups.

As such, Obama was less of an example for how black men should live their lives – especially in relation to their kids – as an illustration of how many actually live their lives (albeit in less fortunate circumstances and with less cultural capital).

This is why it was so disappointing when Obama leaned on the stereotypes about the negligent black father during his Father’s Day speech in 2008, when he was first running for the White House: “They have abandoned their responsibilities, acting like boys instead of men. And the foundations of our families are weaker because of it ... We need fathers to realize that responsibility does not end at conception,” he said specifically addressing the black community as though it, specifically, were remiss. “We need them to realize that what makes you a man is not the ability to have a child – it’s the courage to raise one.”

Obama was less of an example for how black men should live their lives ... as an illustration of how many actually live

Nothing one could argue with this, content-wise. But it’s a speech he’d never have delivered to a white church even though the facts suggest they need to hear it at least as much.

It is also true that black men are more likely to be in prison for drug offenses than any other racial group. But black people are no more likely to actually use drugs (as Obama, incidentally, did as a young man) than any other group; they are just more likely to be criminalized for it. This is why it was so heartening to see Obama sign a bill reducing the sentencing gap between convictions for powder cocaine and crack cocaine and his former attorney general pursue more lenient sentencing for non-violent drug offenders. This will have a major impact on the degree to which black men are able to fulfill their obligations to family, community and society like other men.

Whether white Americans see black men differently as a result of his presidency is more difficult to quantify. Given the success of Trump’s race-baiting campaign, it seems unlikely. Of all the thoughts running through Darren Wilson’s mind that fateful day when he unleashed his bullets on Michael Brown, it doesn’t seem it ever occurred to him that he might be shooting the future president of America.

follow on twitter
Just so we're clear about who's responsible: from the people who brought you Liz Truss and COVID parties. "Employer… https://t.co/UgHRUyiPFu
Covering the Mandela & Obama elections, Katrina, #BLM, guns, knives, riots & statues. Drinking with Maya Angelou… https://t.co/kXVHFQNVNo
RT @thebookseller: "This particular anthology is important to me because it focuses on people, places and issues that have in the past been…
RT @FaberBooks: Dispatches from the Diaspora is available to pre-order, with signed copies available to pre-order from @NewhamBookshop now:…
RT @FaberBooks: Dispatches from the Diaspora: From Nelson Mandela to Black Lives Matter. A powerful, career-spanning collection of @garyyo…
RT @DurrutiRising: Huge mobilisations against the cops in #Athens tonight after a 16 year old Roma boy was shot through the head yesterday.…
A couple months ago I conducted a fascinating public interview with RMT leader @MickLynch4AGS .about everything fro… https://t.co/1zKJwllJW2
RT @SRTRC_England: An exciting new role as head of #humanresources at #ShowRacismtheRedCard Please RT. #educatorsjobs @MichaelRosenYes @gar…
“We didn’t ask for Lady Hussey to resign. But, really, the monarchy must do better on race.” Wanting the monarchy t… https://t.co/Pmo9BYdWnf
RT @mikewhoatv: Riz Ahmed nails it…“where are you really from?” https://t.co/vbL0wJr9dW
© Gary Younge. All Rights reserved, site built with tlc
Can i take flagyl and zithromax together Buy azulfidine pill Actos best buy Lotrisone street price Pepcid online without prescription How to get renagel online How to get a aricept prescription from your doctor Protonix 4 0mg price walmart Tetracycline for sale How to get zyprexa