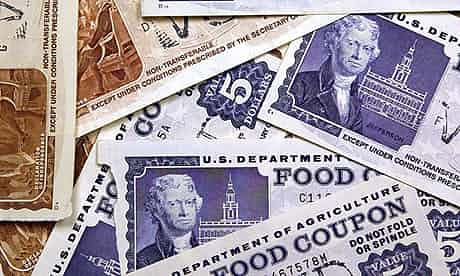 Land of the free, home of the hungry
The Guardian

On Monday afternoon this week, Rachelle Grimmer went into a Department of Health and Human Services in Texas with her two children, Timothy, aged 10, and Ramie, aged 12, and asked for a new case worker who could assist her application for food stamps. She had first applied in July but had been told she hadn't provided enough information and, by most accounts, had been struggling to get by and get help since she moved from Ohio.

She was taken to a small room, where she pulled a gun, sparking a seven-hour standoff with police. Shortly before midnight, three shots were heard. Rachelle had shot both herself and her kids. Police rushed in to find the mother dead and Ramie and Timothy in critical condition. Earlier that morning, Ramie had posted a Facebook message, saying: "may die 2day". She actually hung on until Wednesday. Timothy's condition remains critical.

The tragic unravelling of this particular episode is hardly typical. But the desperation that underpins it is. For, in this period between Thanksgiving and Christmas (when many Americans are worrying about what overindulging will do to their waistline), a significant number is wracked with an entirely different concern: not having enough to eat.

This is no marginal group, no handful of unfortunates and ne'er-do-wells in a time of crisis. Indeed, in one of the wealthiest countries in the world, food insecurity is a common, growing and enduring problem. According to Gallup polling, one in five Americans reported not having enough money to buy food in the past 12 months – the highest level since the month Barack Obama was elected. Around the country, food banks are feeling the pinch of market forces: as poverty climbs, demand is rising and supply is falling as people who would have donated have less left to spare.

An analysis by the New York Times revealed a 17% increase in the number of school students receiving free and reduced lunches across the country between 2006/07 and now. In Rockdale County, east of Atlanta, 63% of students now have subsidised food – up from 46% four years ago.

Between 2008 and 2011, the number of those living on food stamps, assistance to those who lack sufficient money to feed themselves and their families, soared by 50%, putting one American in seven in the programme. Catholic Charities recently revealed that requests for the working poor were up 80% over the second quarter, and up 59% for the middle class.

Similarly, Operation Homefront, a national organisation that feeds the families of military personnel, has seen demand for help double over the last two years. The Washington Post reported that in Fort Hood, Texas, military families stayed up after midnight to register for a free turkey online for Thanksgiving. The 450 birds were gone within an hour. Even as soldiers fight for empire abroad, their families struggle for food at home.

You would think this would be a national disgrace. The land of the free – and the home of the hungry. The sheer scale and intensity of the problem refutes any suggestions of the undeserving poor.

But want has become a term of political abuse, with Newt Gingrich launching his campaign earlier this year by branding Obama "the food stamp president" and continues to berate him as such. Indeed, behind the partisan posturing over deficit reduction, it is rarely noted that rather than impose taxes on millionaires, Republicans are eager to balance the budget on the stomachs of the hungry.

As editor of the Left Business Observer, Doug Henwood, points out in a recent blog posting, these benefits are not particularly generous. "The average [food stamp] recipient gets $134 a month in assistance, which works out to $4.40 a day. That's 10% less than the US Department of Agriculture's "thrifty" meal budget, and about half its "moderate" budget. For your average well-fed American, living on a daily ration of less than $5 for food prepared at home would be hard to imagine. But without SNAP benefits, 46 million people would be in a state of anguish rather than just scraping by."

Yet, this is one area the Republicans are keen to target for cuts. They want to reduce spending on food stamps by around 20%, and in June, voted to slash a different health and nutrition scheme (WIC) for poor pregnant women and children by 10%, which would have denied assistance to around a quarter of a million people.

This will be the primary terrain on which the forthcoming elections will be fought: the needs and aspirations of the working poor. Not so much the destitute – America is always forgetting about them – but the working poor and those who fear descending among them. But for the Democrats to capitalise on these anxieties, they will have to shift the country's sense of what it takes to be poor and convince them that government has a role in alleviating that condition before desperation kicks in.

You'd think that would be straightforward. But illusions of meritocracy, equal opportunity, class fluidity and social mobility die hard. This a country where, according to a Pew survey in 2008, 91% believe they are either middle-class, upper middle-class or lower middle-class, and a Gallup poll in 2005 showed that while only 2% of Americans described themselves as "rich", 31% thought it very likely or somewhat likely they would "ever be rich". Sooner or later, though, reality tends to intrude.

As thousands of people gathered at New Orleans convention centre following Hurricane Katrina, Michael Brown, the hapless head of the disaster relief agency, Fema, was asked why he was not tending to them with shelter and water.

"We're seeing people that we didn't know exist," he said. This has been the official policy of America's political class for some time. "This is a special interest group that not many people talk about because they don't have the wealth to lift a candidate to be president of the United States," explained D Jermaine Husser, the former executive director of South Carolina's Low Country Food Bank.

But there is only so long you can pretend that such a large group of people doesn't exist, and as the poverty rates grow, more and more people who are likely to vote become ensnared in it. Gallup's Basic Access Index, which tracks access to basic needs like food, shelter and healthcare or medicines, is at the lowest it's been since its inception in January 2008. A new measurement of poverty by the Census Bureau, which takes regional cost of living, medical payments and other expenses that do not intrude on the official poverty count, found a third of Americans are either in poverty or desperately close to it.

"These numbers are higher than we anticipated," Trudi Renwick, the bureau's head poverty statistician, told the New York Times recently. "There are more people struggling than the official numbers show."

Poverty may be relative but hunger is absolute. The third world is alive and struggling in the heart of the first. No one can deny it exists. And those who claim they can't see it, either refuse to see it for what it is or simply do not want to look.

follow on twitter
RT @MCRSociology: Gary Younge discusses identity politics and America with Will Hutton in this episode of @thewesocietypod https://t.co/72…
RT @mart_welton: Congratulations to all those getting their A-level results today. If you have BBB at A-level or above you can still apply…
RT @BernardineEvari: Please follow the groundbreaking online #MuseumofColour UK, founded by the unstoppable Samenua Sesher. The 1st gallery…
RT @EthnicityUK: Gary Younge is interviewed by @sonikkalogan about his work on racism and gun violence in @the_hindu #DataPoint podcast. h…
RT @thefreedomi: 🚨 NEW: Saudi women’s rights activist & academic Salma al-Shehab was sentenced to 34 years in prison + 34 year travel ban f…
RT @LRB: #DawnFosterForever! On Thursday 15 September at the @LRBbookshop, @BizK1, @piercepenniless, Lynsey Hanley and @garyyounge will d…
RT @ShowunmiV: This is how we support Black women and girls https://t.co/8YmgV21zHo
RT @sonikkalogan: It's #DataPoint Pod Thursday! In this week's episode, I talk to @noraneus, @garyyounge and @Casey_J_Wooten about the U.S.…
RT @bgnoiseuk: Next month, @LRBbookshop will host an event to celebrate the life and work of Dawn Foster with @BizK1, @piercepenniless, Lyn…
Help me Twitter. The quote: ""You can cut all the flowers but you cannot keep Spring from coming." is most commonly… https://t.co/Xs7JkiOEd5
© Gary Younge. All Rights reserved, site built with tlc
Where to get biaxin pills Buy cheap epivir Get bactroban prescription Where can you get adalat Buy kamagra online uk Symbicort retail price Can you take celebrex and naproxen together Online doctor motegrity Get aromasin Generic lipitor cost