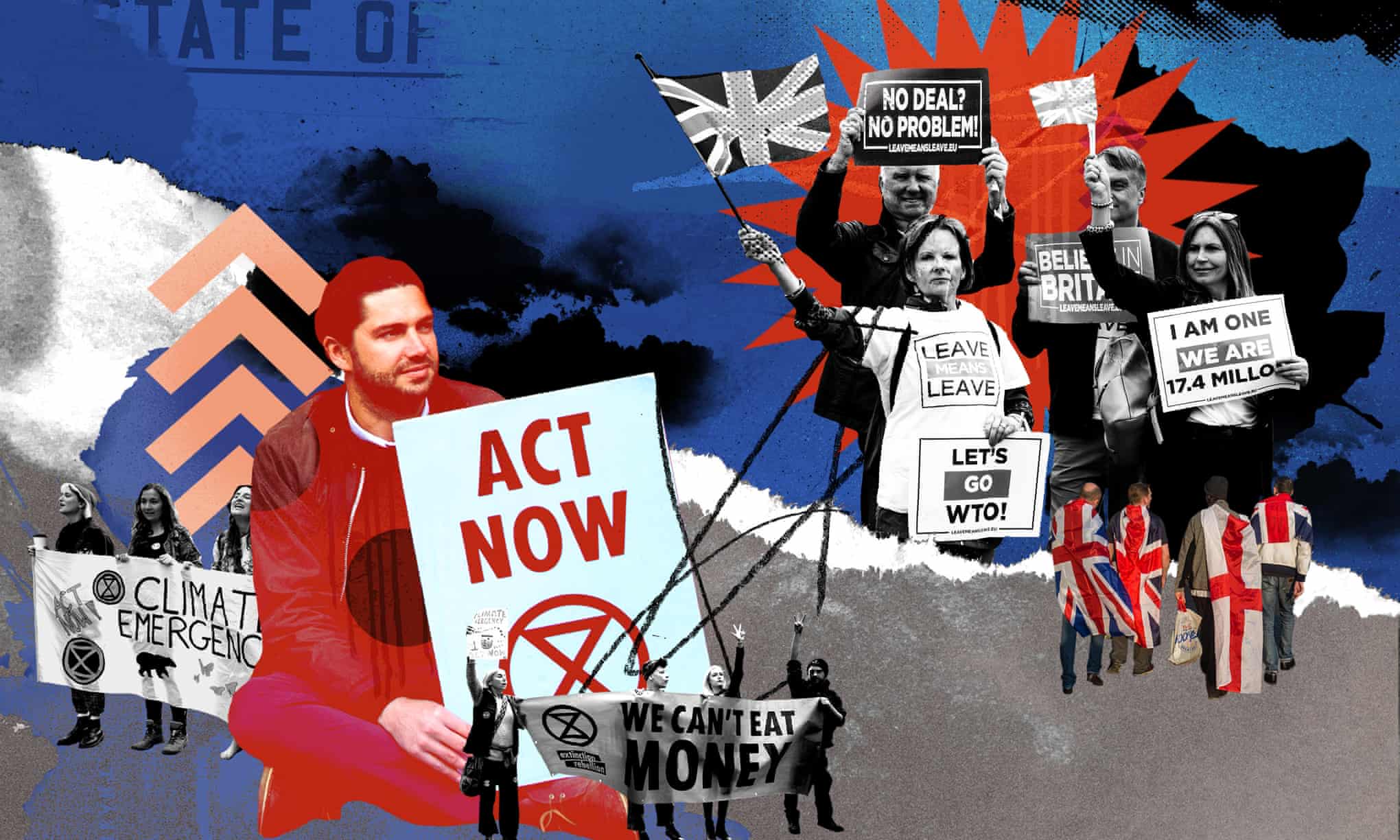 Farage and Extinction Rebellion: two politics of protest, only one has a future
The Guardian,
Illustration: Eleanor Shakespeare

Watching Nigel Farage, leader of the new Brexit party, saunter the few minutes from a Wetherspoons pub to Clacton pier on Wednesday, surrounded by media and supporters, I recalled Michael Rosen’s poem explaining that fascism does not arrive “in fancy dress”: “Fascism arrives as your friend. / It will restore your honour, / make you feel proud, / protect your house, / give you a job, / clean up the neighbourhood, / remind you of how great you once were …”

The point here is not to insult – though those it describes will, of course, be insulted. It is to offer the closest, most accurate description of the social base, rhetorical impulses and political orientation of those attending and addressing the Brexit party event. They are the same people you will see at a Le Pen, Salvini or a Trump rally: older, rural, exurban and provincial (they were white, too, though since this was Clacton, that is hardly an indicator). The collection of pinstripes, tattoos, Barbour jackets and tracksuits marks a crude illustration of the class alliances at play. Rich and poor, brought together by a chronic grievance.

'If I say I don’t like foreigners taking all the jobs, I’ll be arrested,' one man said, before not being arrested

They call him Nigel, and he arrived as a friend.

You can smell the nostalgia on them. You are never too far from mention of the forthcoming anniversary of D-day, the wonders of the Commonwealth or the golden era of British fishing. “We’re a proud nation,” one woman told me. “We’re a fighting nation. We will not be humiliated.”

Whatever else they are, they are not racist. This point is declarative, not discursive – a statement made in response to a question that has not been asked and a point that has not been made. They insist on their own decency and persecution. “Britain’s over, manners are over,” one man told Farage. “If I say I don’t like foreigners coming over here and taking all the jobs, I’ll be arrested,” he said, before not being arrested.

They are motivated, they say, by democracy. They may be following a man who has stood for parliament seven times and lost on every occasion, but they won a referendum and that victory should be honoured. They have a point. The trouble is that the parliament to which they wish to return sovereignty – the very democracy they are fighting for – has not found a way to honour it, and now this is part of the problem too.

And so, ultimately, they are galvanised by betrayal – betrayed interchangeably by all parties, the political class, the establishment and the parliament. This is an itch that can be scratched until it bleeds but will never go away. The country they mourn never existed; their place in the world, as Britons, white people, working people, posh people, is not what it was and is not coming back.

There has always been more to Brexit, and the people who voted for it, than this. But there has never been much more to the driving force behind Brexit than this.

Some remainers have been pining for an electoral force, as single-minded and determined, that might thwart Farage’s advance in the forthcoming European elections in particular, and Brexit’s progress in general.

But so long as we remain trapped between remain and leave, crude identities foisted on us three years ago by a referendum few wanted, we are unlikely to detoxify the culture that made them possible. As urgent as this moment is in our relationship with the EU, Brexit is simply too limiting and distorting a prism through which to engage with the challenges we face.

The kind of politics that might provide a more effective and optimistic counterpoint to the Brexit mentality is, however, in full force. It just doesn’t announce itself as such.

As Farage was winding up on the seafront, environmental protesters in central London were winding down. After almost two weeks of protests against inaction over climate change, Extinction Rebellion (XR) has announced that it will end its blockades. “Now it is time to bring this telling of the truth to communities around London, the regions and nations of the UK, and internationally,” it stated.

It is not obvious how such a movement might provide a counterpoint to a moment like Brexit. In a literal sense, of course, there is no direct connection. True, there is overlap with issues of migration and deregulation. But XR cannot prevent Brexit any more than Farage could prevent climate change – even if he wanted to.

But they share some qualities. To some extent they start in the same place. They view the political system as broken and accuse the political class of having let us down. They believe the status quo is unacceptable, drastic action is necessary, and the push to make things better will have to come from the outside. The similarities pretty much stop there. One is a group without a single leader that holds creative, joyous, disruptive protests that attract a span of ages, not least the young, with a view to building a new future. Its most prominent standard bearer, Greta Thunberg, is a 16-year-old Swedish girl with Asperger’s. The other is centred around a garrulous 55-year-old Englishman, who in the course of several resignations has left his teeth marks on the spotlight, leading embittered, mostly older people with promises of a return to former glory.

In XR we see an inchoate expression of a different worldview. For starters it is a “worldview”. There is no meaningful national response to global warming, because however much you fortify your borders you can’t stop CO2 emissions from migrating. As such they see themselves as part of a global movement to save the planet, which requires seeing foreign people as human beings, and agreements and alliances between nations as fundamental to any possible solution.

XR, like Black Lives Matter, Occupy Wall Street and the anti-war movement before it, has shown that there are significant constituencies for global campaigns that have humanism and international solidarity as their core. Since the demonstrations started, 30,000 new members have offered support and the organisation has raised £200,000. But the victories of Donald Trump and Brexit and the rise of the far right in general show that while these movements may be powerful, they are insufficient, in part because they have failed to convert mobilisations into electoral success.

Which brings us back to our friend Nigel. The logic of Brexit is, in its essence, against any worldview. It seeks a retreat from the rest of the planet into an isolating pastiche of independence so that Brexiters might grab what they can for themselves. “If you want to see what Brexit will do for Clacton, just look out there,” Farage told the crowd, extending an arm towards the waves. “It’s called the North Sea – and half of it should be ours. Not to be shared with the Dutch or the Danes or anybody else. It’s ours. It’s our birthright.” The sea, as any XR protester will tell you, belongs to all of us. Farage would welcome the fish that make it through. But God forbid a human being in search of food, work or refuge might brave those waves.