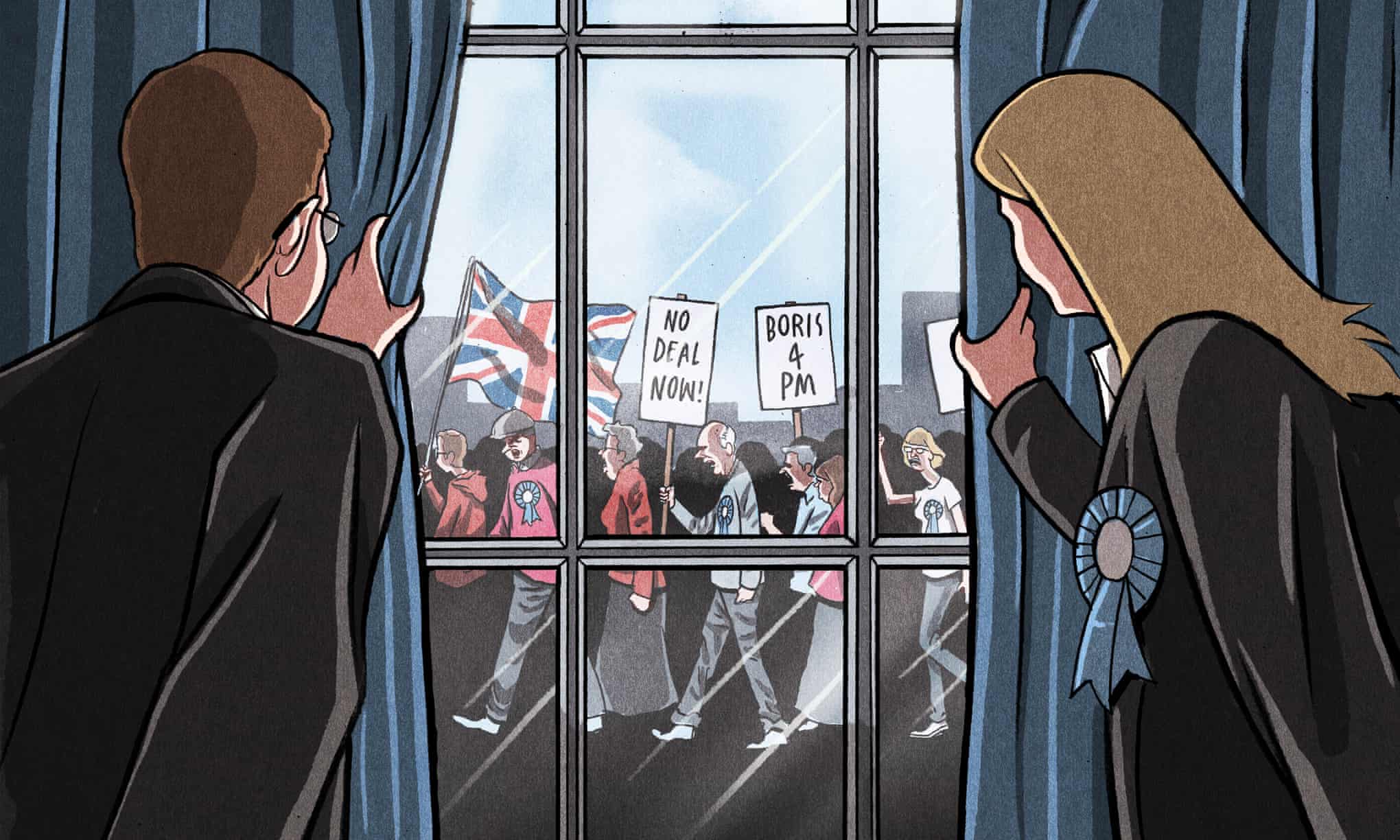 Memo to Tory MPs: denigrating the membership is a really bad idea
The Guardian,
Illustration by Ben Jennings

In the wake of the Brexit referendum, one Labour MP rationalised the effort to unseat Jeremy Corbyn, who had been elected party leader less than a year earlier with one of the greatest mandates in the party’s history, as an act of mercy. “There are always going to be 500,000 people in the country who are off-the-page nuts. The problem we’ve got is that they have all joined the Labour party because of Jeremy Corbyn,” he told Tim Shipman in All Out War. “It slowly dawned on us that the man’s insane and the people around him are too. To think you can run a political party with 172 of your colleagues having no confidence in you is insane.”

A few months later, Labour members returned Corbyn with an even greater majority; less than a year after that he led the party to an increase of 30 seats and 10% in vote share at a general election. It turned out that thinking you can run a party while ignoring what 60% of it wanted was the truly ridiculous idea. Who knew?

Apparently, not the Conservatives. A popular insurrection among Tories, at almost every level, has been growing for some time and is set to intensify in the coming weeks. For the most part the energy has centred around getting rid of the prime minister, Theresa May – something MPs tried to do in December but failed and, according to Tory rules, cannot now attempt again for another year. Grassroots Tories are now demanding an extraordinary general meeting to pave the way for another vote of no confidence; others are circulating a petition to change the party constitution so they could hold another no confidence vote sooner; some MPs are calling for an indicative vote of no confidence.

But the mood is gathering momentum lower down. Last month former Tory MP Nick Boles resigned from his local Grantham party, where he was likely to be deselected because he favoured a soft Brexit. Boles, who has since left the party altogether, told local members he was “not willing to do what would be necessary to restore a reasonable working relationship with a group of people whose values and views are so much at odds with my own”. Other MPs are suggesting they might ignore central office and boycott the forthcoming European elections – and instruct their local parties to do the same. Dissent and division are rife.

Last summer the former Tory leader William Hague argued the party should not pay too much attention to what its members think since “they are not remotely representative of society at large or even of their voters”.

That would be a mistake. Not because they are particularly representative. They’re not. The Tory party’s 2017 accounts showed it received twice as much in donations from the dead, in the form of legacy payments, as from the living. But because the proper response to that problem is either to leave the party or work to change it.

When a parliamentary party runs scared of its membership and does everything it possibly can to marginalise their voices, disparage their views, ignore their choices, minimise their influence, ridicule their priorities and deny their legitimacy, it embarks on a trajectory of irrelevance. The party’s connection with the body that gives it life is weakened, and the relationship between its MPs and broader society ceases to be organic or in any way democratic and becomes transactional, as it buys in pollsters and consultants to tell it what people think and want.

Rather than confront this disconnection, party establishments cut alternative narratives from whole cloth. They accuse “infiltrators” and “entryists” (ie new members) of “taking over” (joining and participating in) the party through “mob rule” (collective action) to launch “witch hunts” (challenge people who don’t represent them). The leadership will describe members with contempt, and credulous journalists will faithfully reproduce its claims, complete with phrases such as “swivel-eyed” and “cult”, as though they were not slurs but analysis. In the words of Bertolt Brecht: “Would it not be easier to dissolve the people and elect another?”

Take Dominic Grieve, who has been the Tory MP for Beaconsfield for 22 years. The local association recently passed a vote of no confidence in him. Grieve has accused a former Ukip candidate of infiltrating the party in order to oust him. There are plausible accounts of an irregular surge in membership prior to the no-confidence vote. There is also a far more plausible rationale for why the vote went the way it did. Grieve backed remain; most Tories backed leave. Grieve supports a second referendum; only 14% of Tories back that. Put bluntly, on the issue they feel strongest about he doesn’t represent them.

We should not be in denial about what all this would mean in terms of the Conservative party and British politics more broadly. The party chooses its leader in two stages. First, MPs whittle down the field to just two; then the wider party membership chooses from that shortlist. Polls suggest that if Boris Johnson were one of those two he would win the leadership easily. That would be an awful outcome. Johnson is a race-baiting opportunist and a narcissistic showboater who cut a ridiculous, reckless and pompous figure as foreign secretary. The prospect of him leading a party, or worse still a country, is sickening.

A more democratic Conservative party would be a more rightwing party. It may also be less electable – although, as Corbyn has shown, electability is not a science. There would be a solid argument for Tory MPs lobbying their colleagues hard to prevent Johnson going on to the members’ ballot. But excluding him does not get rid of the problem. You can stop people voting for something; but that doesn’t stop them wanting it. You just deny them any mainstream outlet for achieving it. That leaves them prone to hucksters and hardliners, such as Johnson, Jacob Rees-Mogg or Nigel Farage, who can promise anything they want in the knowledge they will never be held accountable for not delivering it.

This is precisely what’s happened with Brexit, where those who promised a cake-walk in negotiations, and more money for the NHS, have fled the scene and are now claiming they have been betrayed. With two new parties (the Brexit party and Change UK), and Ukip hoping to sustain a revival, polling will be volatile for some time. But the last two polls have Farage’s Brexit party in the lead with Labour just behind and the Tories a fairly distant third. At this stage Farage has nothing to offer but grievance. But it’s not difficult to see the appeal.

Grieve has said that he plans to carry on “exactly as before”. That’s his decision. But he should not be surprised if his constituency party did exactly the same, or others decided to take their votes elsewhere.