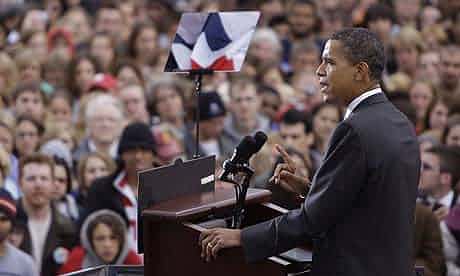 The presidential election campaign is poised for an ugly turn as Republicans resort to increasingly desperate attacks in a bid to chip away at Barack Obama's surge in the polls, according to a leading Democratic activist.

"They're going to start unloading in the next couple of days in a way that makes the swift boat ads look like Public Service Announcements," said former Democratic National Committee chairman Terry McAuliffe, referring to the ads that cast doubt on John Kerry's war record in 2004. Speaking to around 40 Obama supporters at the YMCA in Roanoke in the early morning, McAuliffe said it was the Democratic party's obligation to respond in kind. "[People] are counting on us to fight for them and if we don't want to fight then we shouldn't be in the race."

McAuliffe, who was the chairman of Hillary Clinton's primary campaign, was stumping for Obama in a series of towns in the region. One audience member expressed concern that Obama would not fight back if and when the mudslinging started. "People fear Barack Obama might be another Jimmy Carter - just too smart and too nice," he said.

McAuliffe insisted Obama was made of tougher stuff: "I ran against this man and I tell you. If you hit him hard he'll hit you back harder."

Another activist asked McAuliffe how to counter accusations from Republican friends that Obama is a "socialist". "That's the scare word out there now," she said. "That's the word that's being used to scare people."

McAuliffe conceded that there were some voters you would never reach. "Some people you just can't change," he said. Jackie Holly, who was at the meeting, believed the tone of the campaign would get worse but that it was already in a bad place. "It's already dirty," she said. "It's just going to get a whole lot dirtier."