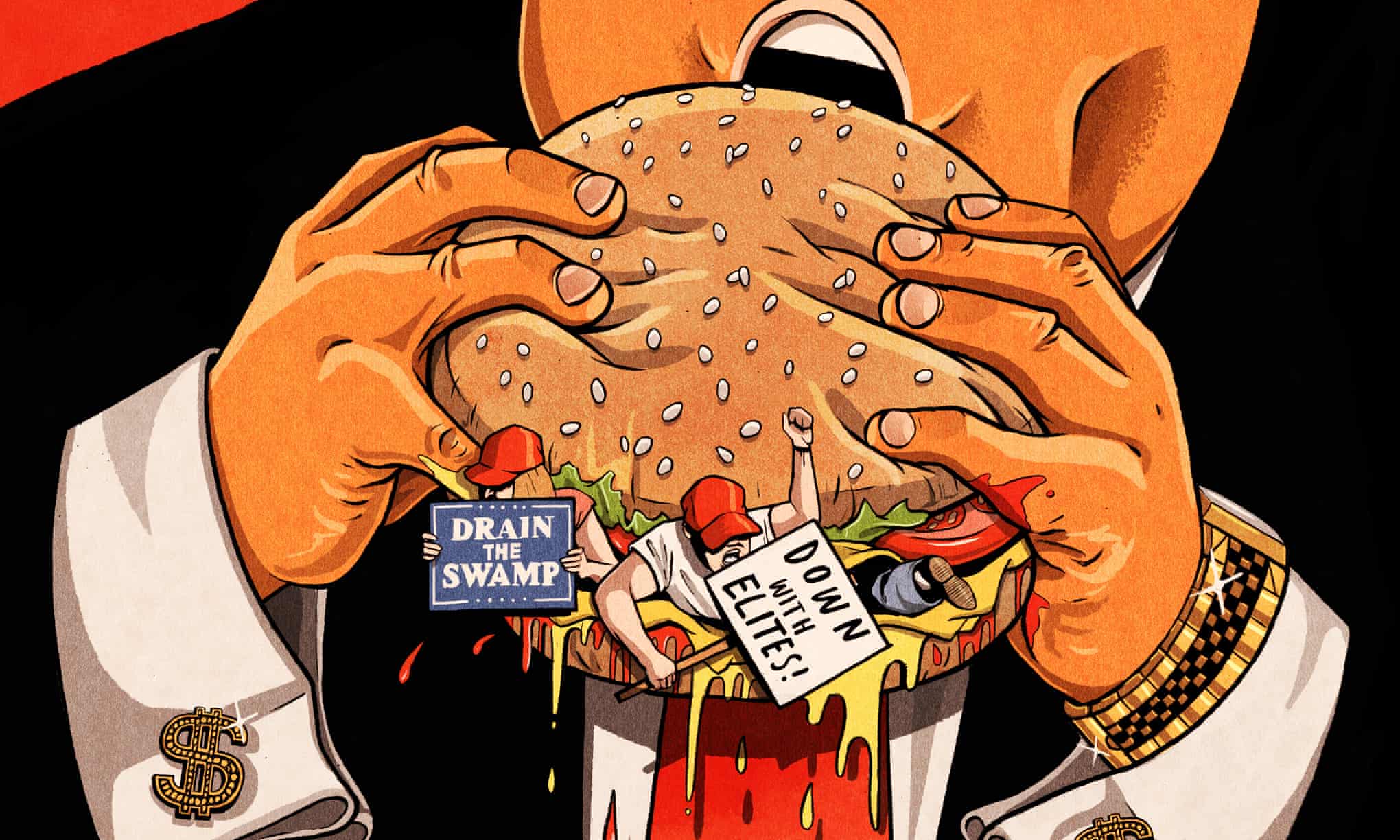 From Trump to Boris Johnson: how the wealthy tell us what ‘real folk’ want
The Guardian,
Illustration: Ben Jennings

I remember the first time I started to understand Donald Trump’s appeal to white, working-class Americans. It was in 2016, a few days before the Iowa caucuses, and he was being introduced by Jerry Falwell Jr, the eponymous son of the famous preacher, in Council Bluffs. Falwell told the crowd that Trump had picked him up in his private plane and offered him dinner. He had been expecting something lavish. “But you know what we had?” he asked the crowd. “Wendy’s.” The audience cheered and laughed along with him.

In that moment it occurred to me that many in that gymnasium, in a town where one in seven lived in poverty and the median household income was $47,097 (£36,813), saw something of themselves in this New York billionaire. His life might have been nothing like theirs, but his tastes appeared familiar. If they ever got rich – and a significant proportion of white working-class Americans sincerely believe that one day they might – then they could be like him, rather than a snob like Mitt Romney, whom they had rejected in a previous election.

When left populists rail against elites they are generally referring to economic and political power. Their target is the richest 1% that owns half the world’s wealth: the newspaper moguls, bankers, political donors and corporate lobbyists; Tony Blair, the Clintons, the Bushes, Old Etonians, Old Harrovians, Oxford, Cambridge, Yale, Harvard, Bullingdon. Those people who run things unchecked from a position of absolute and relative privilege that is often inherited. The left believes that the prospects for democracy weaken as inequalities grow and oligarchies emerge which govern in their own interests. Society then operates according to the golden rule – those who have the gold make the rules.

But when rightwing populists focus on elites they are mostly referring to culture. Their targets are filmmakers, actors, lecturers, journalists, “globalists”, spiritualists, scientists and vegans; the Clintons, Hollywood, Londoners, New Yorkers, Silicon Valley, Sussex and Berkeley. These are the people the right claim are responsible for shaping what people can see or hear, and limiting what they can say. They pillory opinion-formers for looking down on “ordinary people” as being ignorant, bigoted and uncouth. And they are always careful to invent “ordinary people” in their own image. John Kerry’s windsurfing or Barack Obama’s taste for arugula are emphasised as evidence of their lack of connection to basic values. Laying claim to “the real America” or “commonsense values”, they evoke a mythical, homogenous people and culture, only to claim it is being besieged by cosmopolitans, multiculturalists and immigrants. Through what Sarah Igo, in The Averaged American, describes as “the strange slippage between the typical and the good, the average and the ideal”, what masquerades as an embrace of “ordinary folk” is ultimately exposed as an appeal to a ethnically pure, culturally uniform “volk”.

How long do you think you can call people stupid and deplorable before they get mad?

The left could do worse than admit that it has given the right considerable material to work with. It’s not plausible to condemn Trump’s misogyny without some self-interrogation as to how a celebrated film producer such as Harvey Weinstein managed to continue being a prominent donor to liberal causes and the Democratic party when claims of his serial sexual harassment and alleged rapes were an open secret. When Hillary Clinton denigrated half of Trump’s supporters in 2016 as a “basket of deplorables”, or Obama said “bitter” voters in post-industrial towns “cling to guns or religion or antipathy to people who aren’t like them … as a way to explain their frustrations”, people had good reason to feel condescended to.

Whenever liberal commentators insist they are in a better position to understand what working-class people’s best interests are than working-class people themselves, they should be called out on their arrogance. If those who seek a second referendum on Brexit want a different result they will have to do better than claim that some people were too stupid to know what they were voting for first time around.

There is a paternalist streak in liberalism that is more comfortable in providing for the poor than listening to and empowering them, which is not only morally wrong but strategically self-defeating. “How long do you think you can call people stupid and deplorable before they get mad?” asked Jamie Walsh, a Trump voter I met in Muncie, Indiana in 2016.

With that conceded and, hopefully, addressed, the left is in a far more solid place to expose and challenge the disingenuousness, hypocrisy and inadequacy of the culture-warriors on three main counts. First, their prescriptions don’t work. Britain does not feel like a stronger, more confident place since it voted to leave the European Union, but more divided, lost and lonely than anyone can remember. It didn’t put the great back into Great Britain but the little into Little England. In short, it has proved an inadequate balm for the post-imperial melancholy so many were apparently experiencing. Denying Muslims and migrants their civil rights or women their reproductive rights doesn’t give other groups more rights. When terrorists kill fewer people than toddlers with guns and are more likely to be white and American than brown and foreign, the threat to your “way of life” is the way you are living it.

Second, there are far more powerful and plausible national stories we can tell, that are inclusive and optimistic and they occasionally break through. Obama’s first election, when a multiracial, multigenerational, economically diverse coalition came together to embrace a message of hope and change from a black American, was a case in point. It is always worth remembering that roughly one in eight of Trump’s voters backed Obama in 2012.

Similarly, in Britain, the opening ceremony of the London Olympics in 2012 or the, albeit belated, revulsion at the treatment of the Windrush generation this year showed that there was a more inclusive story to be told about what really is great about this country.

Finally, all too often the rightwing cheerleaders for these “ordinary folk” are more embedded in the elites than those they attack can ever be. When George W Bush, who is teetotal, is the man you’d most like to have a drink with, an Old Etonian Bullingdon boy like Boris Johnson is able to get away with posing as a man of the people, and Trump can get the modern equivalent of $140m from his dad and still claim he is a self-made man, something is seriously wrong.

Or as George Clooney put it about Trump: “I grew up in Kentucky. I sold insurance door to door. I sold ladies’ shoes. I worked at an all-night liquor store. I would buy suits that were too big and too long and cut the bottom of the pants off to make ties so I’d have a tie to go on job interviews. The idea that I’m somehow the ‘Hollywood elite’ and this guy who takes a shit in a gold toilet is somehow the man of the people is laughable.”