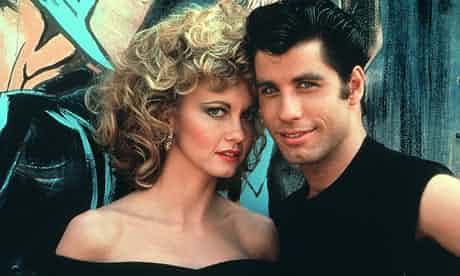 Grease is the one that I want
The Guardian,
Photograph: Cine Text/Sportsphoto Ltd./Allstar

The easy way out would be to make some great claim for very little. To say I love it because of its celebration of white working-class culture or the campest rendition of heteronormative adolescence to make it out of 70s cinema. I'd be lying if I said these justifications had never crossed my mind; I've tried to overexplain it to myself a number of times. After all, the plot, acting and script are all pathetic. And most of the other films I really like – Torch Song Trilogy, Do The Right Thing, Quiz Show – have a point. But when it comes down to it I have to admit there are really just two basic reasons why I love Grease – the singing and the dancing.

Right from the opening sequence, when cartoon characters slick up their hair to Frankie Valli's Grease, pretty much every song is a hit. The first few bars of Summer Loving playing over Travolta's coy refusal to kiss and tell, the moment he slings his leather jacket across the garage before Grease Lightning, the initial riff on the piano introducing Sandy 2:0 at the fairground for You're the One That I Want – are for me moments of sweet, celluloid anticipation (I understand I'm embarrassing myself here but in a world where praising Grease is wrong I don't want to be right). I'll concede a few duff numbers (never been a great fan of Hopelessly Devoted or Stranded At The Drive-In) but that's still a better strike rate than most musicals.

The dancing comes in two parts. First there's Travolta – all rubber-band hips, spider legs and faultless footwork – doing his homoerotic thing throughout. And then there's National Bandstand, where a roomful of teenagers dressed for a wedding – women in crinolene, guys in jackets – flaunt their own supple renditions of Born to Hand Jive after bopping down the Soul Train tunnel to Tears on My Pillow.

I guess when it comes down to it, when I first saw the film aged nine my needs were few and simple and it met them. It was about friends, school, snogging, posing and rivalry – all things I was either familiar with or thought I wanted to be. And it had cheerleaders, drive-ins, diners and juke boxes – all things I was not familiar with but wanted to be. All that stayed with me even when criticism intruded elsewhere. I could go on but that would ruin it. I love Grease. Not ironically: in fact quite straightforwardly. I love the singing and the dancing. And some things in this world, I'm relieved to learn, really aren't much more complicated than that.

follow on twitter
RT @MCRSociology: Gary Younge discusses identity politics and America with Will Hutton in this episode of @thewesocietypod https://t.co/72…
RT @mart_welton: Congratulations to all those getting their A-level results today. If you have BBB at A-level or above you can still apply…
RT @BernardineEvari: Please follow the groundbreaking online #MuseumofColour UK, founded by the unstoppable Samenua Sesher. The 1st gallery…
RT @EthnicityUK: Gary Younge is interviewed by @sonikkalogan about his work on racism and gun violence in @the_hindu #DataPoint podcast. h…
RT @thefreedomi: 🚨 NEW: Saudi women’s rights activist & academic Salma al-Shehab was sentenced to 34 years in prison + 34 year travel ban f…
RT @LRB: #DawnFosterForever! On Thursday 15 September at the @LRBbookshop, @BizK1, @piercepenniless, Lynsey Hanley and @garyyounge will d…
RT @ShowunmiV: This is how we support Black women and girls https://t.co/8YmgV21zHo
RT @sonikkalogan: It's #DataPoint Pod Thursday! In this week's episode, I talk to @noraneus, @garyyounge and @Casey_J_Wooten about the U.S.…
RT @bgnoiseuk: Next month, @LRBbookshop will host an event to celebrate the life and work of Dawn Foster with @BizK1, @piercepenniless, Lyn…
Help me Twitter. The quote: ""You can cut all the flowers but you cannot keep Spring from coming." is most commonly… https://t.co/Xs7JkiOEd5
© Gary Younge. All Rights reserved, site built with tlc
Bactroban ointment price ph Where to get biaxin pills Where can i buy lisinopril How to get renagel online Buy cheap pamelor online Bepreve price per pill Risperidone and abilify together Lotrisone street price Imitrex and naproxen together Online exelon prescription