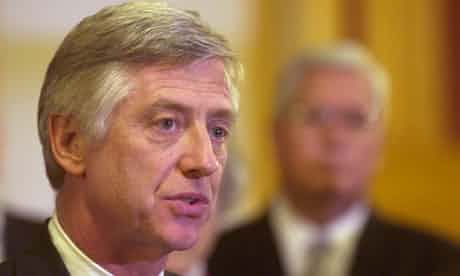 As a progressive former Democrat in Utah, the most reliably conservative state in the country, Rocky Anderson is no stranger to long odds or short shrift. Among other things, Anderson has been a fierce opponent of the Iraq invasion, supports gay marriage and is an ardent environmentalist. (Think former London mayor Ken Livingstone surrounded by conservative Mormons.)

As the former mayor of Salt Lake City, Utah's capital and largest city, he also has a knack for framing an agenda in search of the broadest possible audience. "We don't talk about gay liberation in Utah," he told me in an interview in 2005. "We talk about healthy families and strong communities and say that in the most intimate aspects of our lives the government ought to butt out." He served two terms before bowing out voluntarily.

In the next year, he'll have to harness both that experience and savvy for the task he has now set himself: launching a new political party, the Justice party, and running for president in 2012.

His agenda is a familiar one on the left. Broadly speaking, he wants to break the hold of corrupting corporate influence on the two main parties and give a voice to ordinary working people. It also chimes with the general thrust of the Occupy movement, even though the latter has steered clear of engagement with electoral politics.

"The more time has gone on, the more it has become clear that we're not going see change in this country with these two parties," he says. "There are lots of good individuals in the Democratic party, [but] without Democrats voting the way they did in Congress, we wouldn't have invaded Iraq. We wouldn't have suffered as a nation because of these Bush tax cuts.

"Obama received more money from Wall Street than any presidential candidate ever. And they got a great return on their investment."

This would represent the first attempt to apply the principles of the Occupy movement within the electoral area. Anderson points out discussions about launching the party preceded the emergence of the Occupy Wall Street. But while there are no organisational links, he says there is plenty of common ground. "There is clearly a convergence of interests regarding the concerns we have and the concerns of Occupy Wall Street. There's little I've heard from the Occupy movement that I would disagree with and I think there's little we support that they would disagree with."

Politically, that's likely – but strategically, it's questionable. For some Democrats and progressives will have just two words to say to Rocky: Ralph Nader.

Nader stood as a Green candidate in 2000 when George W Bush took the presidency. Nader won just 2.74% of the national vote but that was enough, arguably, to perform a role as spoiler to Al Gore. Many Democrats still spit his name, insisting he handed Bush victory.

This particular accusation is flawed on two main counts. First, as those same people will also tell you, Gore actually won the 2000 election. It was the supreme court that handed it to Bush. Second, the claim that somehow Gore had a divine right to progressives' votes and that Nader stole them is both arrogant and ridiculous.

Nonetheless, Nader's candidacy did make a difference, forcing Gore to watch his left, as well as his right, flank. And it is a reasonable to enquire whether the pursuit of a progressive agenda is best served by mounting an electoral campaign that could make it easier for Republicans to win.

Anderson believes progressives have been paralysed by the fear that they'll be accused of acting as a Trojan horse for the right; and their inaction has resulted in growing cynicism and political and economic deterioration.

"As long as the fear of being a spoiler prevents people from moving in a direction that will change the corrupt system that's in place, then we'll never see change in this country," he says. "At least, we'll never see changes move in a positive direction. The choice people have now is to either support a very different way that would signal a revolution and vast correction of the systemic problems in our government – or they can carry on going in the same direction they have been going all these years that's resulted in so much tragedy for people in this country and the world."

There are a couple of reasons why it would be a mistake to expect a re-run of 2000.

First, Anderson is nothing like Nader. He has held elected office and won re-election by a seven-point margin during a particularly reactionary period. Also, he is a charismatic figure. I have seen passengers cheer after a pilot announced that he was travelling on a plane from Salt Lake to DC (and he was in coach!). I've seen people ask to have their picture taken with him while he's out for a drink in Salt Lake.

Second, 2012 is nothing like 2000. Approval of the work of Congress is at an all time low and Americans are deeply disaffected with both parties. A recent Gallup poll showed that only 13% of Americans approve of how Congress is handling its work. And even though a narrow majority would keep not vote out their own representatives, 76% say most representatives do not deserve to be re-elected. Many Democrats feel disappointed by Obama; many Republicans despair of their primary choice.

Meanwhile, an organisation calling itself "Americans Elect" has been busy collecting the necessary signatures to facilitate a third-party run. Backed by several millionaires, the party will hold an online nominating convention of its own in June. Whoever wins will have to choose a running mate from another party.

All of that in the midst of the deepest recession for several generations and a culture of political gridlock that shows little sign of changing soon.

"It's a perfect storm for an alternative party that would be a major force in American politics," says Anderson. "The system's completely broken. Everyone in this country knows that's why we're not seeing policies coming from the White House or Congress that really serve the interests of the American people. They keep selling out. Not because they're bad people, but because they're part of the system.

"We don't only have a two-tier economic system in this country. We have a two-tier judicial system, where the rich and powerful don't have to worry about violating the law. Not one person from Wall Street has been arrested, charged or convicted for what has happened during this financial crisis."

Still, third parties fare notoriously badly in America, even when they have pots of money. The most recent example of someone who did make inroads was Ross Perot in 1992. He netted 19% of the vote – and not a single Senate seat. Notwithstanding his complaints about the role of big money in politics, Anderson insists that the fact that he has no money won't matter.

"Communications are now radically democratised so that a campaign no longer needs to depend on tv advertising," he says. "Revolutions have taken place around the world recently without that kind of money, but instead, building on social media and grassroots organising. It's the people who will have ownership of the campaign and the results."

Quite what effect Anderson's bid has remains to be seen. He hasn't made it yet: the party is due to launch soon, perhaps as early as this week. With less than a year to go until election day, he's now busy trying to get his party on the ballot across the country. "We've been hearing from people in 15 to 20 states in the last week," he says.

It would be easy to write Anderson's effort off prematurely. American politics are in an incredibly volatile state. In a world where Herman Cain and Michele Bachmann have both been seriously considered as presidential contenders, anything could happen.

follow on twitter
RT @MCRSociology: Gary Younge discusses identity politics and America with Will Hutton in this episode of @thewesocietypod https://t.co/72…
RT @mart_welton: Congratulations to all those getting their A-level results today. If you have BBB at A-level or above you can still apply…
RT @BernardineEvari: Please follow the groundbreaking online #MuseumofColour UK, founded by the unstoppable Samenua Sesher. The 1st gallery…
RT @EthnicityUK: Gary Younge is interviewed by @sonikkalogan about his work on racism and gun violence in @the_hindu #DataPoint podcast. h…
RT @thefreedomi: 🚨 NEW: Saudi women’s rights activist & academic Salma al-Shehab was sentenced to 34 years in prison + 34 year travel ban f…
RT @LRB: #DawnFosterForever! On Thursday 15 September at the @LRBbookshop, @BizK1, @piercepenniless, Lynsey Hanley and @garyyounge will d…
RT @ShowunmiV: This is how we support Black women and girls https://t.co/8YmgV21zHo
RT @sonikkalogan: It's #DataPoint Pod Thursday! In this week's episode, I talk to @noraneus, @garyyounge and @Casey_J_Wooten about the U.S.…
RT @bgnoiseuk: Next month, @LRBbookshop will host an event to celebrate the life and work of Dawn Foster with @BizK1, @piercepenniless, Lyn…
Help me Twitter. The quote: ""You can cut all the flowers but you cannot keep Spring from coming." is most commonly… https://t.co/Xs7JkiOEd5
© Gary Younge. All Rights reserved, site built with tlc
Voltaren gel diclofenac sodium topical gel price Cheap generic lotensin What i should buy with luzu Renagel online in india Cheap prednisone How much does cardizem cost per pill How to get lioresal without prescription Best place to buy adcirca online Voltaren street price How to get jalyn in the us