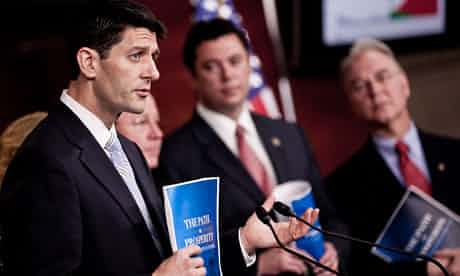 How being 'the party of no' is working for the GOP
The Guardian,
Photograph: TJ Kirkpatrick/Getty Images

In exit polls during the Republican primaries, voters were given four choices about what they believed to be the most important quality in a candidate: "can defeat Obama", "true conservative", "strong moral character" and "right experience".

While all might be considered important, given that the purpose of primaries is to choose a contender to fight in the general election, one would have imagined the first would have won hands down. Not so.

While defeating Obama was always the most popular quality, it rarely exceeded 50%. Indeed, in Ohio, Florida, New Hampshire and Iowa – four swing states of the kind the Republicans must win if they hope to take the White House – defeating Obama never got more than 45% (Florida), and went as low as 31% (Iowa).

But winning has long ceased to be the primary aim of a significant portion of the Republican base. If it had been, they might have been running the Senate by now. In 2010, they selected two ultra-conservatives, Christine O'Donnell in Delaware and Sharron Angle in Nevada, in winnable contests where more moderate candidates were available. They lost them both.

The balance between principle and pragmatism is a key element of electoral strategy and political practice. On that front, in recent years Republicans have appeared to be considerably unbalanced. On the stump, they often seem to vote not with taking office in mind, but with making a noise. When in office, their target seems not to make legislation, but to make a point. In the short term, this all appears both futile and infantile – a political party intent not on governing but on opposition. But in the longer term, it may also prove incredibly effective.

Nevertheless, the result does shed light on the velocity and arc of the modern Republican party's trajectory. Lugar was no moderate. He voted against Obama's healthcare reform and the stimulus bill, and has long been a proponent of a constitutional amendment to balance the federal budget. His problem, apart from long-term incumbency during an insurrectionary period, is that while he was in office, he tried to get things done – or at least, did not see it as his sole function to stop things getting done.

He voted for both Obama's nominees for the supreme court and backed the Dream Act, which would offer citizenship to illegal immigrants. Striking a deal with Obama on anything, it seems, is akin to dancing with the devil. Now, Lugar's gone.

His departure sends a signal to those who remain that compromise – the means by which anything gets done in the Senate – will not be tolerated. The word is out.

Earlier this year, Olympia Snowe of Maine, one of the few moderate Republicans, retired. Last month, another veteran senator, Orrin Hatch of Utah, was forced into a run-off by a Tea Party challenge.

While, occasionally, this may mean losing seats, the overall effect is to transform the party. In a two-party system, that entails a shift in the centre of electoral gravity to the right.

A healthcare reform policy once championed by Republicans (including Mitt Romney and New Gingrich) has been implemented by a Democrat and is now fiercely opposed by its original proponents as "radical" and "socialist". What was once considered conservative is now mainstream, even – as in Lugar's case – moderate. And what was once considered moderate – Snowe – no longer exists. A recent article by Ryan Lizza in the New Yorker pointed out:

"The number of Republicans who now consider themselves 'liberal' is now close to the the number who describe themselves as Aleut or Eskimo."

This is a recent development. As Geoffrey Kabaservice asserts in Rule and Ruin:

"The appearance of a Republican party almost entirely composed of ideological conservatives is a new and historically unprecedented development. It is only in the last decade or so that 'movement conservatism' finally succeeded in silencing, co-opting, repelling, or expelling nearly every competing strain of Republicanism from the party."

The consensus used to be that this was the product of polarized politics, suggesting that both sides – Democratic and Republican – were equally responsible. That is no longer sustainable as an argument. A YouGov poll last year showed two-thirds of Democrats preferred a member of Congress who "compromises to get things done", while two-thirds of Republicans preferred one who "sticks to his principles, no matter what".

On the night Lugar lost, Democrats voted in the more moderate candidate in their Wisconsin primary to challenge Governor Scott Walker in a recall election. Democrats' willingness to compromise and, at times, even capitulate means that even when they do hold the reins of power, they are not in control of the agenda. In their new book, Even Worse Than it Looks, Norman Ornstein and Thomas Mann argue:

"The GOP has become an insurgent outlier in American politics. It is ideologically extreme; scornful of compromise; unmoved by conventional understanding of facts, evidence, and science; and dismissive of the legitimacy of its political opposition."

True. Only, this "outlier" runs most states, the lower chamber of Congress, and is in serious contention for the presidency. There is method to this Republican madness, and it may yet prove even more effective.