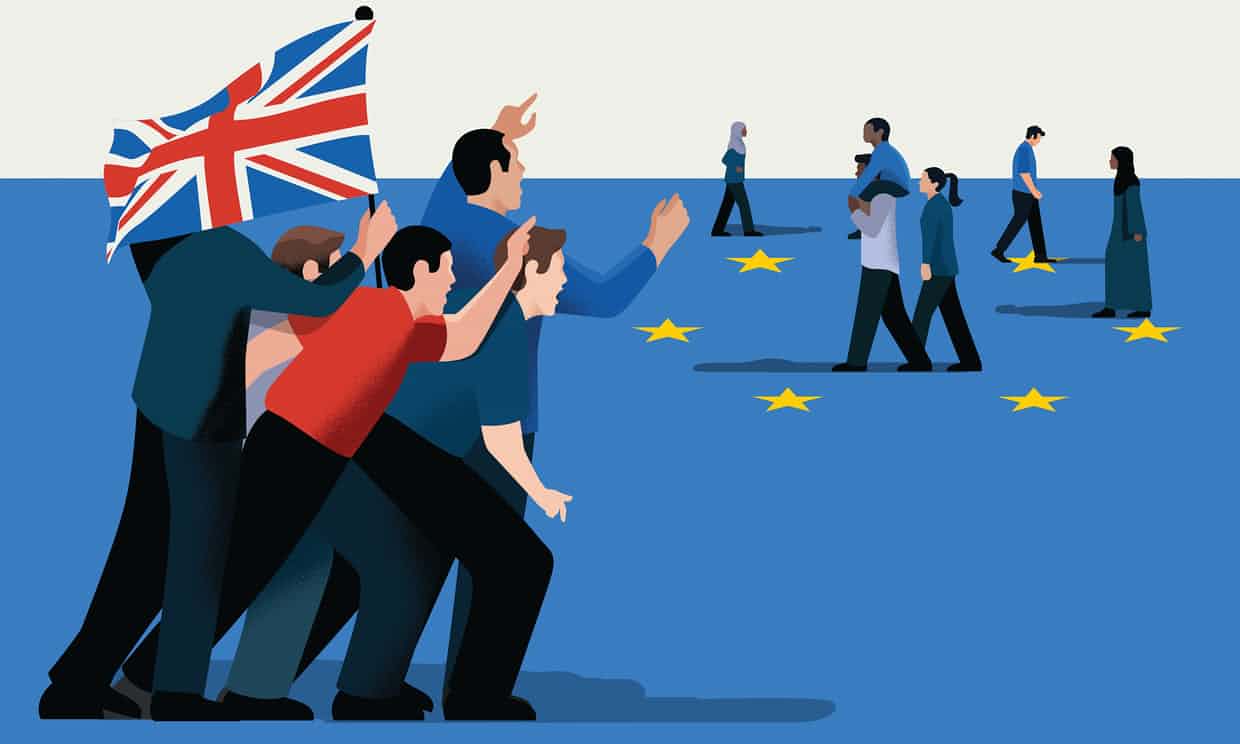 It’s never their fault: why the Brexiteers love to cry betrayal
The Guardian,
Illustration: Nathalie Lees

The notion of personal responsibility was once such a linchpin of conservative thinking that almost every riposte to liberal ideology ran through it. Whether the right was making the case for longer prison sentences or against the welfare state, the argument generally rested on the principle that we must stand by the consequences of our actions. To cite the context that shaped how a decision was made, insist on the parallel importance of collective responsibility, or expect the state to cushion the blow, were all signs of whiny weakness. To think otherwise revealed not just a flawed political philosophy but a lack of moral fortitude.

The world of national sovereignty, racial purity and ethnic homogeneity is not coming back because it never existed

But the new right, on both sides of the Atlantic, is increasingly behaving in precisely the manner for which it lampoons progressives. Its politics start from the point of victimhood. Its persecutors are many – the media, the elites, the liberal establishment, feminists, Muslims, migrants. In the past week alone the US president, Donald Trump, has targeted the media for both reporting him accurately in Britain (he was on tape), and failing to realise that he meant the exact opposite of what he actually said about Russia.

The crimes of these tormentors are many: they are misrepresenting us, looking down on us, taking what’s ours, or in some other fundamental way undermining “our way of life”. Whether these grievances are real or imagined is less important than the fact that they are felt. Not long after a spate of racial clashes in northern England in 2001, some white people in Burnley said that Asians had better speed bumps – “like helicopter pads” – while all their own area got was “a lump of tarmac in the road … It’s because the council are scared of them”.

This sense of victimhood and grievance provides some of the basis for the kinds of political realignments we are now witnessing. Recent research by Diana Mutz, a politics professor at the University of Pennsylvania, has shown there was little relation between voting for Trump in 2016 and having lost a job or income, or the density of unemployment or manufacturing jobs where Trump voters lived. There was, however, a propensity to vote for Trump among those who felt that “their dominance as a group was under threat”.

For all the bellyaching about the left’s obsession with “identity politics” – a term now so maligned it can mean whatever you want it to mean so long as you don’t like it – the right has most effectively leveraged identity (rallying people through race, nation, religion, gender, myth and nostalgia) to political and electoral ends. “It used to be a pretty good deal to be a white, Christian male in America, but things have changed, and I think they do feel threatened,” Mutz told the New York Times.

Since the repression of those who are not white, Christian or male provides inadequate balm for those who feel threatened – denying Muslims and migrants their civil rights, or women their reproductive rights, does not give anyone else more rights – these moments inevitably end with accusations of betrayal. Much is promised (“Take back control” … “Make America great again” … “Let’s take Finland back!”), but the lion’s share of what is actually delivered, beyond bigotry and bombast, is to the very elites who were invoked as a source of the grievance in the first place. 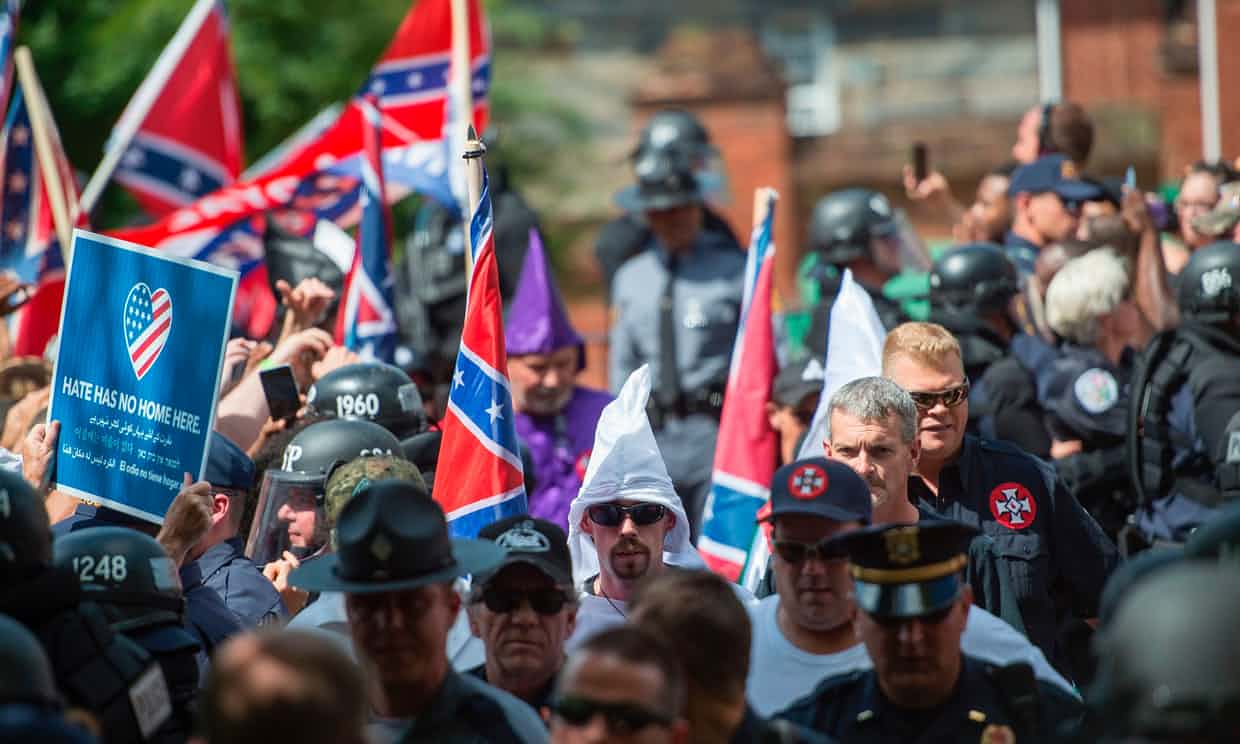 A far-right rally in Charlottesville, Virginia, in defence of southern Confederate monuments, on on 8 July 2017. Photograph: Andrew Caballero-Reynolds/AFP/Getty Images

The world of national sovereignty, racial purity and ethnic homogeneity is not coming back because it never existed and cannot be created from whole cloth. And so rather than take responsibility for the fact that the agenda they have embraced was opportunistic, flawed and destined for failure, the right’s most vocal practitioners absent themselves of all responsibility and instead cry “betrayal”.

This is the stage we have now reached with Brexit. Rhetoric has come toe-to-toe with reality. Those who imagined that Britain is stronger than it is – that the European Union is weaker than it is, the Irish border would matter less than it does, and time would stand still while we worked ourselves out – find their imperial imaginations imploding under the weight of their own hubris. And so they plan to get their accusations of treachery, disappointment and disavowal in early, to avoid the rush.

At this stage it is the government that they claim is failing to deliver the type of Brexit that voters wanted. It’s impossible to tell how they’d know, since the referendum only asked “remain or leave?”, giving no way of knowing precisely what people wanted beyond that. The accusation is also undermined by the fact that for the most part it is Tories accusing other Tories of betrayal. The former could get rid of the prime minister – either by challenging Theresa May internally or backing a vote of no confidence. But they have done neither, making them complicit in whatever “betrayal” now emerges.

The accusers’ inability to rally significant numbers to their cause in parliament is due to the fact that the few proposals they have are even less plausible or popular than May’s. For example, neither David Davis, the former Brexit secretary, nor Boris Johnson, the former foreign secretary, produced a workable alternative in their resignation speeches and letters. “The problem is not that we failed to make the case for a free trade agreement of the kind spelt out at Lancaster House,” Johnson said in the Commons this week. “We haven’t even tried.” Quite what stopped him, as a leave campaigner, prime ministerial contender, or foreign secretary, from spelling out precisely what that case was is not clear.

Nonetheless, the narrative of betrayal has clear appeal on two fronts. First, it anticipates a life for the Brexit project beyond whatever unsatisfactory outcome is bound to emerge. Betrayal provides a permanent enemy and solid foundations for a longstanding grudge. Just as some white southerners in the US rally around the Confederate “lost cause” more than 150 years after defeat, so some Brexiteers can be galvanised around the noble, and traduced, desire for a monocultural sovereignty for years to come.

Second, it aspires to relieve the instigators of any or all responsibility. The focus of their ire may yet shift to parliament, the media or Whitehall (and nobody ever went broke blaming Jeremy Corbyn for anything), but the logic will remain the same: “Were it not for them [whoever “they” are], this would have been a success.”

After the recent Chequers gathering, Johnson said that accepting May’s Brexit deal would be like “polishing a turd”. He has a point. It’s now painfully clear that whatever agreement is reached, it will satisfy few leave or remain voters. What Johnson does not acknowledge is that it is his turd. If he is incapable of clearing up after himself, the least he can do is not blame the stench on others.