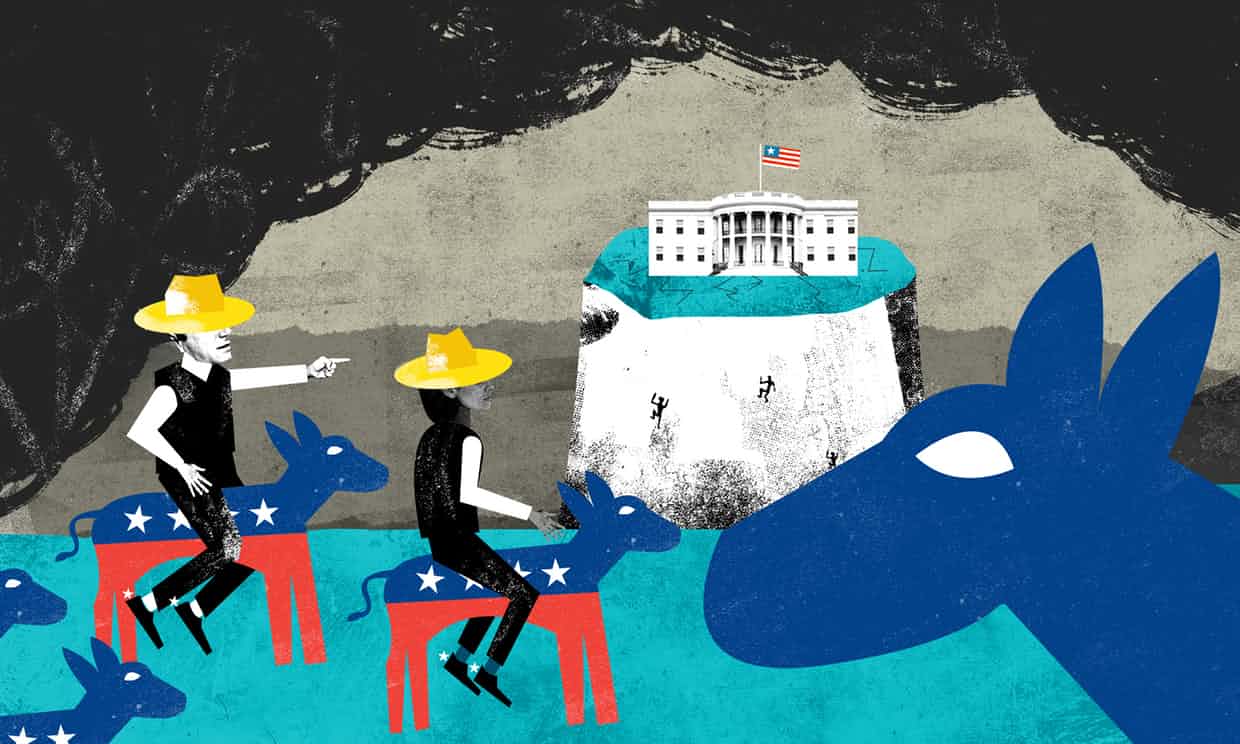 The Democrats must do more than simply oppose Donald Trump
The Guardian,
Illustration by Nate Kitch

For quite some time during the primary season for the 2016 presidential race, Democratic party leaders were delighted that Donald Trump was leading the Republican pack. They assumed the brash reality TV star would expose the bigotry of the Republican base before flaming out and leaving a more plausible candidate beholden to an energised mob, and consequently unelectable. After Trump insulted Heidi Cruz (a Goldman Sachs executive and wife of fellow Republican presidential hopeful Ted Cruz) for her looks, the chairwoman of the Democratic National Committee, Deborah Wasserman Schultz, said: “I want Donald Trump to talk every single day for the rest of this election.” He did. And he won.

More than two years later, Trump is still talking. Last week he branded journalists “horrible, horrendous  people” to a large crowd in Pennsylvania, who chanted, “Lock her up!”, referring to Hillary Clinton. “We’re building [the wall],” he told them. “And we’re going to start getting very nasty about it … It’s our country, so get the hell out.”

The question is: who is still listening? And do the Democrats have anything more convincing to say this time? A slew of election results earlier this week gave some indication as to the impact two years of Trump’s presidency are having on the electoral and political landscape.

The first and probably most important development is that the Republicans are consistently down. Way down. In a congressional byelection in Ohio, the Republicans appear to have eked out a narrow victory with just a one percentage-point margin (postal votes have yet to be counted). Trump, of course, claimed this as a triumph. But this was in a white, mostly suburban district that Republicans have held since 1982. Trump won it by 11 percentage points in 2016; the previous Republican incumbent enjoyed margins three times as great. It shouldn’t have been close. But the Republicans threw everything at it, including visits from the president and vice president. The Democrats need to win 23 House seats in order to win control – according to the Cook Political Report there are 68 Republican-held seats as, or more, vulnerable in the lower chamber. Strong Democratic showings in three congressional primaries in Washington state, some in districts where Republicans were thought to be quite safe, further illustrated that this was no one-off.

But while they are down they are by no means out. Trump’s approval ratings are only marginally lower than Barack Obama’s were at this stage in his presidency, and trending up. The proportion of Americans who think the country is moving in the right direction is also growing, and is at a considerably higher level than at this point during Obama’s first term. A majority of Republicans support separating immigrant children from their parents at the Mexican border; 44% believe Trump should have the power to close down news outlets; and most approve of his handling of Russia. He is no longer an outlier. This is his party. It is a sign of both his power within it and the damage it is causing that Cruz has invited the man who ridiculed his wife to campaign with him in Texas – a state where Republican presidents generally go to get money, not votes.

Support for Trump is intensifying even as it shrinks. This makes sense. Trump has slashed taxes for the rich, significantly relaxed regulations for business and will soon have named two conservative supreme court justices. He is delivering for his base – which is overwhelmingly white and suburban or rural. And with every gratuitous attack on a black sports star or the media, and every xenophobic aside or outburst on the global stage, they love him more. It’s not that they don’t know how it looks to the outside world or his opponents; it’s that they don’t care.

Democrats have, so far, been the passive beneficiaries of the outrage that has ensued. The large marches in the capital, demonstrations at the border and gun-control protests all illustrate significant enthusiasm for combating the Trump agenda. But there is a disconnect between these electoral gains and this political energy. The Democratic leadership has decided to stand not so much against Trump’s agenda as in the way of it. A Washington Post poll last year showed a majority of registered voters thought the Democratic party stood for nothing other than being against Trump.

A year and a half after the most bigoted, misogynistic, jingoistic president in living memory won the election and polluted the political culture, Democratic leaders are still just letting him talk because they aren’t clear what they have to say for themselves. “That message is being worked on,” said the fourth-ranking Democrat in the House, Joseph Crowley, last summer. “We’re doing everything we can to simplify it, but at the same time provide the meat behind it as well. So that’s coming together now.”

A year later Crowley, who had been in Congress for 19 years and not faced a primary challenger in a decade, lost his seat in a primary to Alexandria Ocasio-Cortez, a 28-year-old activist, in one of the greatest political shocks of the year. Ocasio-Cortez is one of a record number of women (overwhelmingly Democrats) running this year, including 11 gubernatorial nominees for major parties; Sharice Davids in Kansas, who would be the first Native American woman elected to Congress; and Rashida Tlaib, in Michigan, who’d be the first Muslim congresswoman (there is also a record number of Muslims running). Ocasio-Cortez is a self-described democratic socialist who ran on a platform of free education and healthcare, ending the privatising of prisons and the abolition of ICE – the Immigration and Customs Enforcement agency responsible for implementing family separation at the border.

“We have to stick to the message, ‘What are we proposing to the American people?’ Not, ‘What are we fighting against?’” she said after her victory. “We understand that we’re under an antagonistic administration, but what is the vision that is going to earn and deserve the support of working-class Americans?”

In the runup to this week’s elections Ocasio-Cortez toured the country, drumming up support for radical candidates within the Democratic party. Nearly all of them lost. That the left insurgency should fail to enjoy a seamless ascendancy should surprise few. Roughly two-thirds of Democrats say they would not vote for a socialist. What is truly intriguing is its presence means the question is seriously being asked. The fact that several candidates have won Democratic nominations as “socialists” suggests people can be persuaded. Just a few years ago the label “socialist” here was at best an eccentricity and, more commonly, a slur. Now it is central to a potentially viable and vibrant constituency of activists and voters that can no longer be ignored.

For now, letting Trump talk every single day, virtually uninterrupted, appears to be the official Democratic party game plan. With three months to go until the midterms they have proved they can provide opposition; they have yet to indicate they are willing to provide an alternative.