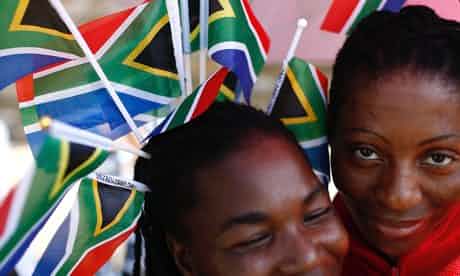 At the memorial service for Nelson Mandela earlier this week, Sipho Matlane, 26, held his African National Congress flag high as he led a historic chant calling for the former ANC chief Oliver Tambo to tell the former apartheid president PW Botha to release Nelson Mandela. Matlane was two when Botha stepped down; three when Mandela was released; six when Tambo died and seven when apartheid ended with South Africa's first democratic elections. So where did he learn the song?

"Everybody knows it," he says. "I don't remember specifically when I learned it. But if you grow up in Soweto then you grow up with these songs. It's our culture."

Like Matlane, a generation of South Africans have only known Nelson Mandela as a free man. For their entire politically conscious lives the country has always been in transition, the ANC has always been in government and apartheid has always been history. In Zimbabwe, they are known as the "Born Frees" and have proved among the least impressed by Robert Mugabe's credentials as a national liberator.

But over the past week South Africa's young have been out in force singing the praises of the disbanded ANC's armed wing, Umkhonto we Sizwe (Spear of the Nation) and decrying the "Mellow Yellow" – armoured police vehicles once synonymous with brutal township policing and now an exhibit in the apartheid museum.

They have been among the most vocal revellers and mourners across the townships and at the various events marking Mandela's demise even though for much of their adult lives he has been out of the public eye. "Mandela has been an absent presence for some time now," explains Ebrahim Fakir of the Electoral Institute for the Sustainability of Democracy in Africa. "But he and many of the other giants of the liberation struggle like Walter Sisulu or Oliver Tambo still loom just as large as before, just not in the same way."

"They're not singing it with the same sense of historicism that their parents did," says Eusebius McKaiser, writer and radio personality. "They know there's greatness there but I'm not sure they always know why."

The question, particularly following the booing of the prime minister, Jacob Zuma, at Mandela's memorial ceremony, is the degree to which these attachments reflect personal affection for Mandela as opposed to political affiliation to the ANC. The world did not just lose an icon last week; the ANC also lost the man who most clearly symbolised its moral centre and political history as a liberation movement. For those who were not there for its glory days, what is there left to identify with?

Steven Friedman, director of the Centre for the Study of Democracy at the University of Johannesburg, says he can see no evidence of a demographic electoral shift. "The sense that someone inevitably looks at the world entirely differently to the way their parents do just doesn't stand up," he says.

The annual survey conducted by the Institute for Justice and Reconciliation indicates there is far more variation in political attitudes between races than generations and a significant erosion in the nation's political leadership across the board.

Fakir points out that while the young and old may have lived through different eras, they have not necessarily had very different upbringings. "There is some social mobility but a large number of black kids live almost exactly the same lives as their parents did. They believe the ANC is their best hope; starting from a base of zero there have been incremental improvements."

Alexandra township bears some evidence of progress. More paved roads and newly built homes in this densely packed township indicate it has not been entirely forgotten. But nonetheless the general impression almost 20 years after Mandela's first victory remains one of grinding poverty and desperation. "You can't say the government has done nothing," says Thembile Nkosu, 30, balancing a baby on her hip. "But they haven't done enough and they need to do more. Where are the jobs? Without work how can we live?"

Nationally, unemployment among 15- to 24-year-olds stands at more than 50%. Among black South Africans the figure is far higher. "I'm not sure how free the 'Born Frees' really are," says Friedman.

"The whites are still racist," said Thami Manana, 29. "It's not the same as before but it's still bad. Look at the houses they live in and the areas where we live."

Andile Mngxitama thinks this discontent will be the ANC's achilles heel. "There is a disconnect, particularly among the young, between remembering Mandela and remembering the ANC. What you have seen this week is a combination of nostalgia and melancholy. The ANC has the weight of its history pulling people towards it and the weight of its record in government pulling it down."

Fakir argues these disappointments don't necessarily negate young people's appreciation of the ANC's historic achievement in creating a non-racial democracy. "Even for people who are struggling the fact that they have liberty and freedom still gives them dignity and hope," he says.

Mngxitama is one of the senior figures in the Economic Freedom Fighters (EFF), a new political party started earlier this year by Julius Malema, the former ANC Youth League leader who was expelled for making racially inflammatory remarks. He claims the Mandela today's young people are embracing is not the same as the one who has been showcased in the media for most of this week. "They are remembering the military guy, the guy who fought. They are not celebrating the reconciler and the saviour. They're not chanting for the five years when he was in government. They are talking about the 27 years when he was in jail."

The EFF – a potent blend of Leninism with black consciousness – believes it can win the youth from the ANC and that the absence of Mandela will make it easier.

With an election looming that looks like wishful thinking, not least because, as in almost every country, the young are the least likely to turn out. Only 12% of eligible 18- to 19-year-olds and 65% of 20- to 29-year-olds are registered. Those motivated enough to go to the public events mourning Mandela's death in the teeming rain are, in all likelihood, among those most likely to vote. But beyond the faithful the sense of malaise is real. It seems to go beyond the ANC to a disillusionment with the choices the democracy is offering in general – Indignados Africanus. More than a third of South Africans said they would rather not vote than change their party allegiance – a position more deeply entrenched with young black people than their white counterparts.

"When it comes to local elections people are refusing to vote because they say it's not worth the effort," a young man told pollsters in the Western Cape. "Most times they just don't care because every promise that gets made does not get delivered. That's what threatens democracy at the end of the day because people just don't care any more. Things are just carrying on. Nobody cares about them, so why must they vote people into positions which don't do anything for them?"

Mngxitama points to the young people leading protests against poor service delivery across the country as evidence that this disaffection need not curdle into despair.

"We never stopped singing resistance songs," he says. "Because after 10 years of neoliberal democracy the opportunities for resistance are still there."

follow on twitter
RT @MCRSociology: Gary Younge discusses identity politics and America with Will Hutton in this episode of @thewesocietypod https://t.co/72…
RT @mart_welton: Congratulations to all those getting their A-level results today. If you have BBB at A-level or above you can still apply…
RT @BernardineEvari: Please follow the groundbreaking online #MuseumofColour UK, founded by the unstoppable Samenua Sesher. The 1st gallery…
RT @EthnicityUK: Gary Younge is interviewed by @sonikkalogan about his work on racism and gun violence in @the_hindu #DataPoint podcast. h…
RT @thefreedomi: 🚨 NEW: Saudi women’s rights activist & academic Salma al-Shehab was sentenced to 34 years in prison + 34 year travel ban f…
RT @LRB: #DawnFosterForever! On Thursday 15 September at the @LRBbookshop, @BizK1, @piercepenniless, Lynsey Hanley and @garyyounge will d…
RT @ShowunmiV: This is how we support Black women and girls https://t.co/8YmgV21zHo
RT @sonikkalogan: It's #DataPoint Pod Thursday! In this week's episode, I talk to @noraneus, @garyyounge and @Casey_J_Wooten about the U.S.…
RT @bgnoiseuk: Next month, @LRBbookshop will host an event to celebrate the life and work of Dawn Foster with @BizK1, @piercepenniless, Lyn…
Help me Twitter. The quote: ""You can cut all the flowers but you cannot keep Spring from coming." is most commonly… https://t.co/Xs7JkiOEd5
© Gary Younge. All Rights reserved, site built with tlc
Where to buy zithromax over the counter Onglyza 5 mg tablet price Can you take tylenol and imitrex together Voltaren street price Buy real prandin online Cheap propranolol 100 canada Can gabapentin and celebrex be taken together Voltaren gel diclofenac sodium topical gel price How to buy prednisone in usa Low price glucotrol