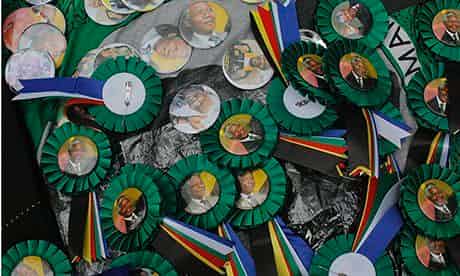 Nelson Mandela has been laid to rest – but his legacy must not be
The Guardian,
Photograph: Kim Ludbrook/EPA

During the late 1960s, as Martin Luther King increasingly drew connections between racism, economic inequality and military imperialism, his popularity plummeted. In the first half of the decade, Americans were evenly split on their view of him. By 1966, twice as many had an unfavourable view of him as a favourable one. The next year, in a speech against the Vietnam war, he branded the US "the greatest purveyor of military violence in the world today". By the time he died in 1968, he was a marginalised figure. He had been defending garbage workers in Memphis, and when strike protests turned violent a Dallas Morning News columnist branded him "the headline-hunting high priest of nonviolent violence".

Three decades later, when Americans were asked which public figures they most admired from the 20th century, he came second to Mother Teresa. When his memorial was unveiled in the National Mall in Washington in 2011, 91% of Americans (including 89% of whites) approved.

Public memory does not commit itself to the task of recalling events in an objective, disinterested manner but with great prejudice. People sift through the available facts, refract them through their own perspective and then arrange them in their own self-interest. The result is several versions of events, never settled but highly partial and always contested – constantly vying for hegemony, authenticity and credibility.

The significance of how things are remembered goes beyond historical accuracy to contemporary politics. The past has a legacy and the present has consequences: our understanding of how we got here and why is crucial to our decision about where we go next and how. While Barack Obama was cloaking himself in King's moral authority during the 50th anniversary of the March on Washington, he was simultaneously contemplating bombing Syria. The version of King that the nation had settled on – "the dreamer" – was in stark contrast to the King who stood against militarism. So the latter was conveniently forgotten.

Such distortions are not the work of malign individuals so much as the benign victory of mythology. "It's not a person [who does this]," the Uruguayan author Eduardo Galeano explained to me in a recent interview. "It's a system of power that is always deciding in the name of humanity who deserves to be remembered and who deserves to be forgotten … We are much more than we are told. We are much more beautiful."

What was true for King is no less true for the late Nelson Mandela. As I wrote in my recent book, The Speech: "White America came to embrace King in the same way that most white South Africans came to accept Nelson Mandela – grudgingly and gratefully, retrospectively, selectively, without grace but with considerable guile. By the time they realised that their dislike of him was spent and futile, he had created a world in which admiring him was in their own self-interest. Because, in short, they had no choice."

Recent polling bears out the degree to which South Africa has experienced a white flight from historical responsibility. The annual Reconciliation Barometer, a survey by the Institute for Justice and Reconciliation, reveals that whites are considerably less likely than blacks to think "apartheid was a crime against humanity" or that "the government wrongly oppressed the majority of South Africans". As a result, 54% do not believe that "many black South Africans are poor today because of apartheid's legacy", and more disagree with the statement that "reconciliation is impossible without economic redress" than agree with it. "This is important," the report points out. "If South Africans do not agree on the connection between economic exclusion and our historical legacy, they are not likely to agree with the need to address that legacy."

As Mandela was laid to rest on Sunday the issue of how he should be remembered remains very much in play. How those debates play out matters both globally and nationally. The desire to remember his contributions as those of a unique and brilliant individual who single-handedly guided the nation to democracy and stability is understandable, but neither accurate nor helpful. Not because he wasn't unique or brilliant, but because these qualities on their own would never have sufficed. South Africa was never lacking in gifted people – Steve Biko, Chris Hani, Albertina Sisulu, Ruth First … the list goes on. What it lacked was a system capable of unleashing those gifts instead of crushing them. Nor was liberation the work of one man. Indeed, how could it have been when the struggle continued throughout his imprisonment.

Mandela could do what he did precisely because he stood at the head of a movement dedicated to democratic transformation. It's simply not tenable to praise him as a negotiator and reconciler without also claiming him as a military chief and a radical. Nor is it feasible to laud him personally without also acknowledging the mass of South Africans who made his achievements possible. These things are connected. The generosity of spirit and lack of vengeance that has been championed this past fortnight finds its counterpart in the patience of black South Africans, still waiting for the government to adequately address entrenched inequalities, who will never have a square named after them or foreign dignitaries appear at their graveside.

Internationally, those – such as the US, Britain and Israel – who pose as standard-bearers for human rights, freedom and democracy today are among the very nations that did most to support apartheid and disparage the ANC. They may have changed their attitudes to Mandela since he emerged from jail, but there's little evidence that they've changed the broad thrust of their foreign policies today. Meanwhile, those who they continually demonise were doing exactly the opposite. Mandela himself pointed this out to George W Bush after the US president urged him to sever links with Yasser Arafat, Fidel Castro and Muammar Gaddafi. "When we came to you and asked for assistance, you called us terrorists," Mandela told Bush, according to Ahmed Kathrada, who spent 26 years in Robben Island with Mandela. "It would be immoral and ungrateful to break with old allies."

Mandela's long walk to freedom ended today under the vast sky and lush slopes surrounding his childhood home of Qunu. May he rest in peace. But his legacy still lives. And, in the interests of those who must live with it, the struggle to remember it honestly continues.

follow on twitter
RT @MCRSociology: Gary Younge discusses identity politics and America with Will Hutton in this episode of @thewesocietypod https://t.co/72…
RT @mart_welton: Congratulations to all those getting their A-level results today. If you have BBB at A-level or above you can still apply…
RT @BernardineEvari: Please follow the groundbreaking online #MuseumofColour UK, founded by the unstoppable Samenua Sesher. The 1st gallery…
RT @EthnicityUK: Gary Younge is interviewed by @sonikkalogan about his work on racism and gun violence in @the_hindu #DataPoint podcast. h…
RT @thefreedomi: 🚨 NEW: Saudi women’s rights activist & academic Salma al-Shehab was sentenced to 34 years in prison + 34 year travel ban f…
RT @LRB: #DawnFosterForever! On Thursday 15 September at the @LRBbookshop, @BizK1, @piercepenniless, Lynsey Hanley and @garyyounge will d…
RT @ShowunmiV: This is how we support Black women and girls https://t.co/8YmgV21zHo
RT @sonikkalogan: It's #DataPoint Pod Thursday! In this week's episode, I talk to @noraneus, @garyyounge and @Casey_J_Wooten about the U.S.…
RT @bgnoiseuk: Next month, @LRBbookshop will host an event to celebrate the life and work of Dawn Foster with @BizK1, @piercepenniless, Lyn…
Help me Twitter. The quote: ""You can cut all the flowers but you cannot keep Spring from coming." is most commonly… https://t.co/Xs7JkiOEd5
© Gary Younge. All Rights reserved, site built with tlc
Can you buy avapro over the counter Where can you get spiriva What do you need to buy eldepryl Get amaryl Buy viagra online usa Buy sildenafil generic online Where can i buy bepreve over the counter usa Can you take naproxen and robaxin together Best place to buy motegrity online Can you buy furosemide over the counter usa