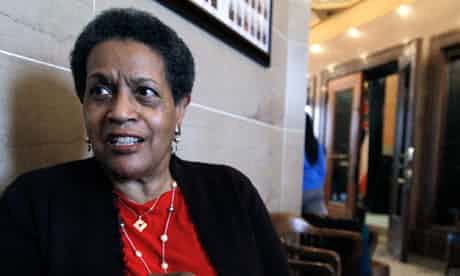 On the evening of 11 June 1963, Myrlie Evers-Williams lay in bed in Jackson, Mississippi, allowing her three small children stay up with her to watch President John F Kennedy deliver a landmark address on civil rights.

"If an American, because his skin is dark, cannot eat lunch in a restaurant open to the public," said the president. "If he cannot send his children to the best public school available; if he cannot vote for the public officials who will represent him; if, in short, he cannot enjoy the full and free life which all of us want, then who among us would be content to have the color of his skin changed and stand in his place? Who among us would then be content with the counsels of patience and delay?"

They were still up when her husband Medgar, field secretary for the Mississippi chapter of the National Association for the Advancement of Coloured People (NAACP), came home just after midnight from a meeting with activists in a local church. Lurking in the honeysuckle bushes across the road from his house was Byron De La Beckwith, a fertilizer salesman and Klansman from nearby Greenwood, with a high-powered hunting rifle. The sound of Medgar slamming the car door was followed quickly by gunfire. The children dived on to the floor just as they had been taught. Evers-Williams ran downstairs to find her husband slumped on the doorstep. The bullet went through his back and came out of his chest. He died in the early hours of 12 June.

The assassination, just as the civil rights movement was cresting, would place Evers-Williams in the national spotlight, the most prominent of what would become known – problematically – as a 'civil rights widow'. She would be joined before the decade was out by Corretta Scott King and Betty Shabbazz, Malcolm X's wife.

"We came to realise, in those last few days, last few months, that our time was short," she said later. "It was simply in the air. You knew that something was going to happen, and the logical person for it to happen to was Medgar."

The rifle was traced back to Beckwith, whose fingerprints were found on the rifle's telescopic sight. Some witnesses reported seeing a man who looked like him in the area that night as well as a car that looked like his white Plymouth Valiant. Nonetheless, all-white juries twice failed to reach a verdict in 1964. During the second trial, Mississippi governor Ross Barnett interrupted the trial to shake hands with him while Myrlie was testifying. He would not be convicted until 1994, thanks in no small part to Evers-Williams' meticulous collection of evidence.

On Monday, on Martin Luther King day, Evers-Williams, 79, will deliver the invocation at Barack Obama's second inauguration, making her the first woman and layperson to do so. In a day pregnant with symbolism – the first black president being sworn in on a federal holiday day dedicated to the nation's most revered black, historical figure – Obama will be using King's bible to take the oath of office.

Asked if she ever imagined back in the dark days of segregation then that there might be one day be a black president, Evers-Williams told the Religious News Service: "Of course, we all knew, we hoped, we worked, we prayed that one day there would be a man or a woman of African American descent who would become the president of the United States of America.

"That has been a dream come true, but if we look at the politics leading up to particularly his second term, there were blocks that came during this time of getting people to register and to vote that are reminiscent of some of those actions that took place 50 years ago to keep people of my race and others away from the polls."

Half a century after Medgar's death, Evers-Williams, who remarried in 1975, is comfortable still being closely associated with the memory of her first husband. "I have always wanted to see Medgar be recognised for what he did," she says. "Medgar's remains are in Arlington Cemetery, only about four to five miles away from the spot where the inauguration will take place. It's kind of a miracle for me that all of this is happening at this particular time."

But her inclusion in the ceremony sees her take centre stage again as a political figure in her own right. After Beckwith's second trial, Evers-Williams moved to California, went to university and twice, unsuccessfully, ran for Congress. During the mid-1990s when the NAACP, the nation's oldest civil rights organisation, was mired in scandal and economic difficulty, she became its chair and was instrumental in turning it around.

But as she takes to the podium on Monday, she will help restore to public memory the vital contributions that women made to the civil rights movement that were often denigrated within the movement at the time and have been omitted from the historical record since. Church-led and male dominated, the civil rights leadership often gave its female footsoldiers little or no credit for the essential work they did and the extraordinary sacrifices they made.

In Montgomery, Alabama, for example, the first woman to plead not guilty after she refused to sit at the back of the bus – 15-year-old Claudette Colvin – was dropped after she became pregnant. After Rosa Parks stepped up, and the bus boycott that would propel King to national attention was under way, she would be marginalised after she refused to simply be a benign figurehead. One of the leading local activists, AD Nixon, referred to her as a "lovely, stupid woman"; ministers greeted her at church functions with irony: "Well, if it isn't the superstar." And one of King's key aides, Reverend Ralph Abernathy referred to her as a "tool" of the movement.

During the march on Washington, where King delivered his "I have a dream" speech, no women were scheduled to speak and women leaders were not allowed to march alongside the men. Only after an uproar from some women activists was Evers-Williams, who'd lost her husband just 10 weeks earlier, included on the roster. She could not get there. "That was one thing that has haunted me over the years," she says. "Fifty years later, I receive an invitation to deliver the invocation."

Evers-Williams was set to speak alongside the Rev Louie Giglio, who pulled out from giving the benediction following an outcry over a homophobic sermon he gave in the 90s. Evers-Williams' denominational affiliation can best be described as promiscuous. "I have been Baptist, I have been Methodist, I have been Presbyterian. I have attended all those churches depending on where I have lived my life."

Back in 1963 at the march on Washington, after much complaining from many quarters, the organisers hastily arranged a "tribute to women" in which the female civil rights leaders were asked to stand on stage and be applauded by the crowd. At the time, Parks turned to a fellow campaigner, Daisy Bates, and said "Our time will someday come."

Half a century later, Evers-Williams has finally arrived to take centre stage in the capital.