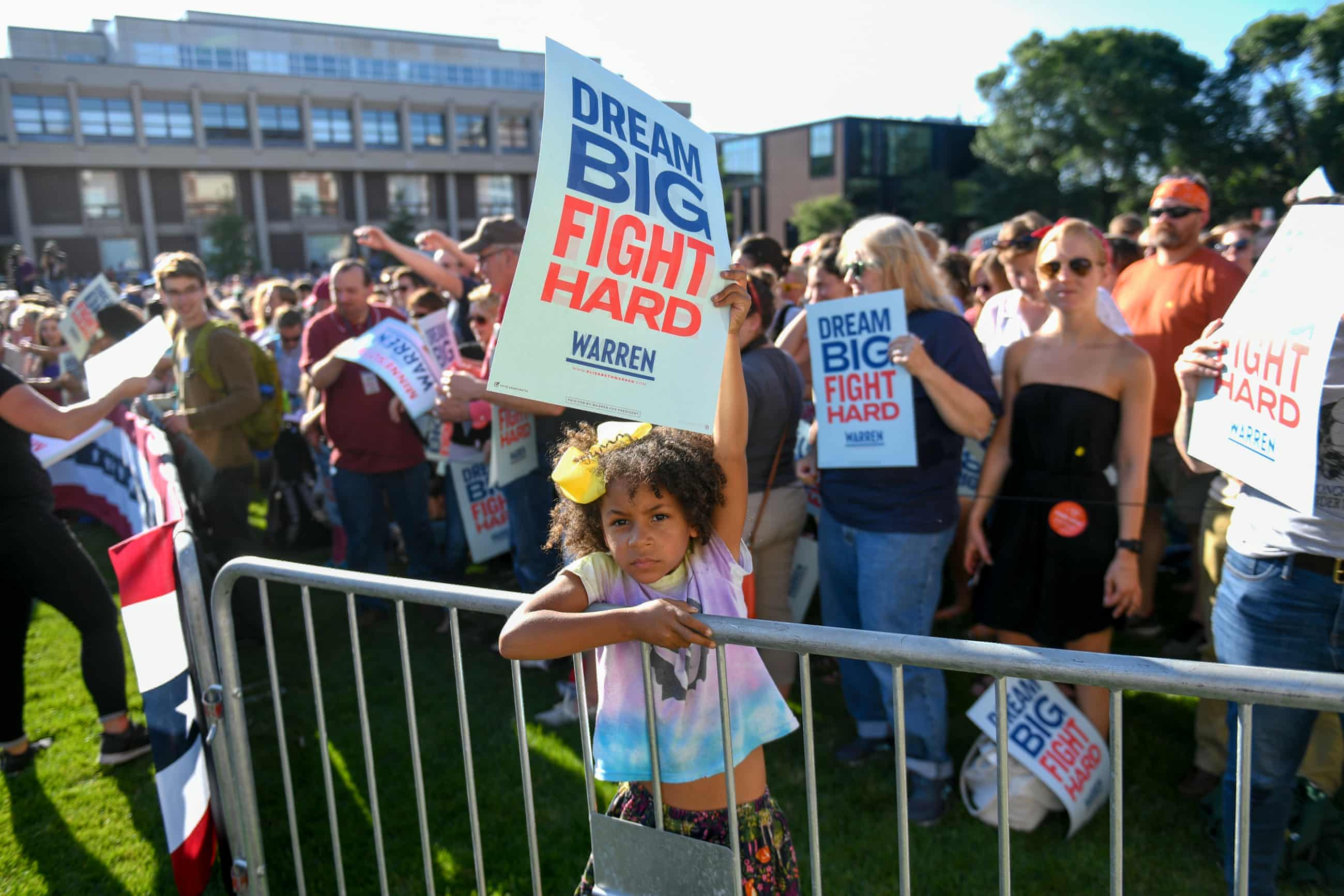 In some ways, it feels like the left in America has been here before.

Shortly before the 2004 election, previously inactive liberals were being energized into the electoral process to prevent George W Bush’s re-election, which they believed would fundamentally undermine American democratic norms.

In Derry, New Hampshire, I met Pam and Patrick Devaney, a shy couple who felt compelled to canvass for Democratic nominee John Kerry. “I’m not comfortable doing this but it has to be done,” said Pam. “Our democracy is at stake. This is the most important election in my lifetime.”

Patrick added: “I always thought someone else was out there doing the job for us. Now I wonder what we’re doing.”

This was essentially defensive. Working to make sure a bad situation did not get worse. That year I drove over 2,000 miles from Kerry’s home in Boston to Bush’s former home in Midland, Texas, and met a lot of people like Pam and Patrick, who were drawn into the process for the first time. But I never met a single person who was enthusiastic about John Kerry. They just wanted to get rid of Bush.

Four years later I saw people inspired to work for Obama. There was a delirium, bordering on the messianic, among many liberals at that time, that could be challenged but rarely penetrated. The transformative nature of his candidacy, while clear symbolically, was often mistaken for substance. When Obama won in South Carolina, where the Confederate flag still flew on the statehouse, the crowd chanted: “Race doesn’t matter!”

What is different about this moment is that the momentum on the left seems to be propelled by a potentially combustible combination of both sentiments: an urgent need to prevent the rapid and deep degradation in national politics that has escalated since the election; but also an inspiration that something better and more robust must also follow.

There is an acute sentiment that getting rid of Trump is insufficient: that a series of deeper more enduring dysfunctions in American political culture – money, race, nativism and beyond – have brought the country to this place and need to be fundamentally addressed. Defeating Trump remains the overwhelming priority among virtually everyone that I spoke to. But there is a common, if not quite consensus, view that an electoral victory needs to be underpinned by thoroughgoing political change: a feeling that there is no going back to the way it was before 2016, and nor should there be.

This has created space for a set of policy proposals on the left that were once deemed marginal and are now mainstream. In the past it was left to an outlier candidate like Dennis Kucinich, polling in single digits and counting yogic flying among his pastimes, to propose anything beyond incremental changes. Today, the Green New Deal, an ambitious plan to massively reduce carbon emissions and increase social spending and environmental protection through huge public investment, has been embraced by many of the 2020 candidates.

Similarly, plans to provide Medicare for everybody – effectively universal healthcare provision – or free college tuition for public universities, once considered hopelessly idealistic, have broad support among the contenders.

With the cost of college and healthcare rising far faster than wages, and environmental awareness growing, all of these proposals are not only popular with Democrats but command a majority, or a plurality, in the country as a whole, challenging the notion among some moderate governors that Democrats are shifting too far to the left. True, other policies such as decrimializing the border and reparations for slavery, which have come up during debates and even some leading candidates have not dismissed out of hand, do not poll that well even among Democrats.

But the point is that the terrain for what candidates might support and remain electorally credible has shifted considerably towards the progressive side. One of the most memorable exchanges in the debates thus far came when John Delaney repeatedly warned Elizabeth Warren that “impossible promises” of “free anything” will doom the party’s chances.

To resounding applause, Warren captured the mood with her response: “I don’t understand why someone would go through all the trouble of running for president of the United States just to tell us what we can’t do and what you won’t fight for.”

Whether the left has the capacity to sustain these shifts in sentiment and policy is another matter. As they are moving leftwards, Trump’s election has emboldened conservatives to move the country in the other direction.

“[Trump’s] election produced these big marches,” said Keeanga-Yamattha Taylor, an assistant professor at Princeton, “which are important because they stop people from feeling isolated. It also produced huge donations to a range of campaigning organisations and NGOs. But what it has not produced are the kind of movements that can sustain and focus the anger against his policies. When Alabama effectively banned abortions, there was outrage. But there was no real fightback.”

It is in this space, between the anger at what is happening and the capacity to shift the course of the nation’s politics, that a considerable amount of progressive anxiety resides. Trump, with his unfiltered misogyny and bigotry, has been clarifying. No self-respecting liberal can split the difference on his misanthropy. The question is what to do about it.

“They know what side they’re on in terms of ‘is Donald Trump a good guy?’ They need to also hear what are the substantive differences. It’s very important that we do not get trapped into thinking that everything was fine until Trump was elected. I think we must understand Trump as a symptom and not a cause. And then we have to explain what he’s a symptom of and start to cure the disease.”