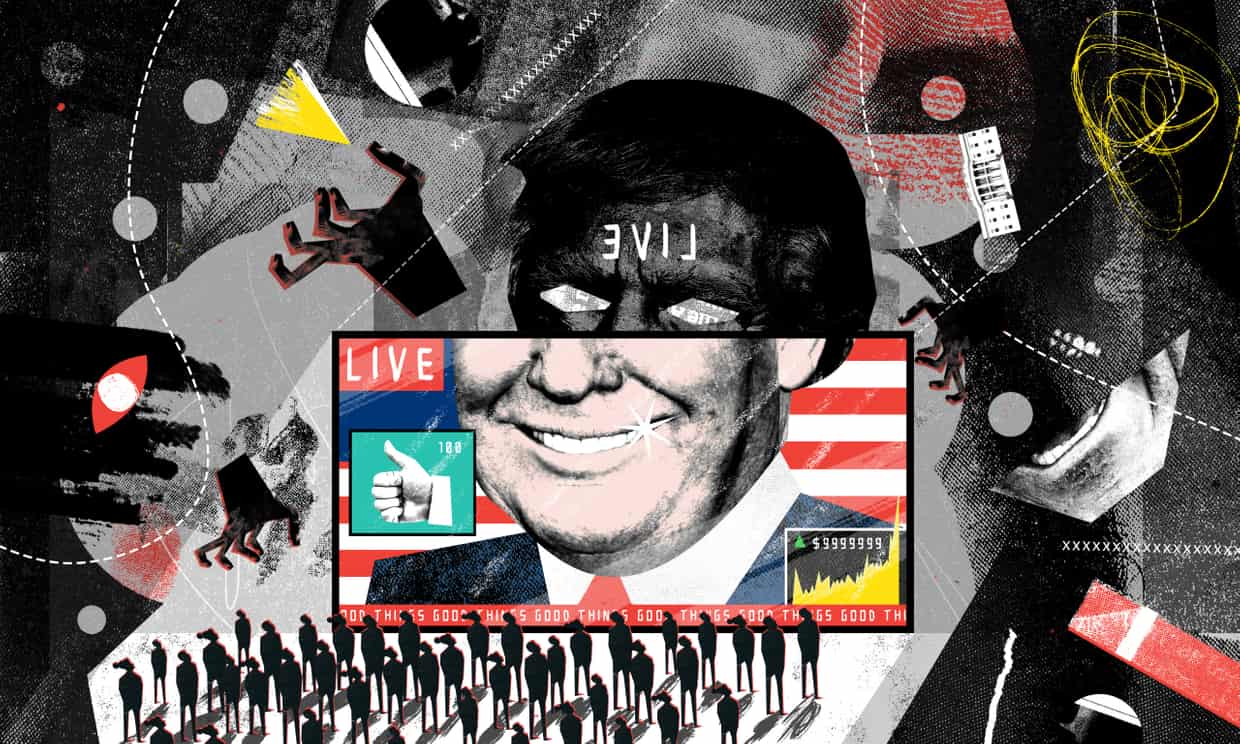 Trump’s base may not like him, but they’re not about to ditch him
The Guardian,
Illustration: Nate Kitch

There was a time, not that long ago, when serious allegations that a president had had an affair with a Playboy model a year after he married his third wife and a few months after she gave birth to their son, and then cheated on both of them with a porn actor just a month later would have been a career-ending scandal. During the impeachment hearings following the revelations that President Bill Clinton had had an affair with an intern, Monica Lewinsky, South Carolina Republican senator Lindsey Graham reminded the upper chamber: “Impeachment is not about punishment. Impeachment is about cleansing the office. Impeachment is about restoring honour and integrity to the office.”

But these are not normal times. Now it takes the FBI to raid the offices of the president’s personal lawyer, make him flip and confess that he illegally paid off both women at the president’s behest, just months before the election, to really qualify. Yesterday Graham said “it was too early to tell” if Donald Trump could be impeached.

A few hours after Trump’s former campaign manager Paul Manafort was found guilty on eight counts of financial crimes, and his former lawyer Michael Cohen confessed to eight more, the president addressed a rally in West Virginia. With his former associates heading for jail, the crowd chanted “lock her up” (referring to Hillary Clinton) and “drain the swamp” (referring to political lobbyists), as though the events of the day took place not just on a split screen but within a split reality.

Trump talked about illegal immigrants committing crime, the wall, Chevrolets in Beijing, the beauty of coal, and his mother’s Thanksgiving turkey. He didn’t mention the convictions, or the grand jury indictment earlier in the day of Duncan Hunter, the second congressman to endorse him, for improper use of campaign funds, or the charges against Chris Collins, the first congressman to endorse him, earlier this month for securities fraud. Indeed the closest Trump came to the Mueller investigation into Russian influence in the 2016 election was to dismiss the whole thing. “Fake news and the Russian witch-hunt,” he said. “We’ve got a whole big combination. Where is the collusion?”

Rick Hunt, one of his supporters at the rally, was asked what he thought of everything that had taken place that day. “All I know is everybody makes mistakes,” Hunt told Politico. “But if they try to take Trump out of office, there’s going to be a revolt.”

Much to liberals’ chagrin, the future of the US presidency is unlikely to be determined by the courts alone. The issue of whether he is a crook, liar or cheat is an important factor in what comes next: but it is not necessarily the defining one. Trump’s fate will be decided in the messy interplay between the judicial and the political, in a moment when distraction has far higher currency and is traded far faster than detail.

The gravity of the legal situation for Trump cannot be overestimated. Seven Trump associates have now pleaded guilty or been found guilty as a result of the Mueller investigation. None of these cases have touched on Russia. But most have leveraged cooperation that could lead to Russia, with Cohen being the most important catch. Cohen hasn’t been asked to testify before Mueller yet. But his lawyer says he’d be happy to – and that he knows about a possible “conspiracy to collude and corrupt American democracy” and about “the computer crime of hacking and whether or not Mr Trump knew ahead of time about that crime”. The man who once said he would take a bullet for Trump may now become the general of a circular firing squad, in which individuals in Trump’s inner circle decide to save their own skins and turn on each other and him.

But impeachment is a political process, not a judicial one. It requires a simple majority in the House of Representatives to vote for Trump to face impeachment charges, followed by a trial in front of the Senate, in which two-thirds of senators must vote to remove him from office. At present, Republicans run both houses. The Democrats stand a good chance of winning the House in November and a slim chance of taking the Senate. But they have no chance of getting the majority they need for impeachment in November’s midterms unless Republicans turn on Trump. That looks unlikely.

No other president has commanded a higher level of approval from their own party 500 days after their election than Trump, with the exception of George W Bush following 9/11. An intensification of his legal problems may well lead to his political support softening: Republican leaders are already telling candidates in marginal seats to distance themselves from Trump. But they are unlikely, on their own, to result in his base’s collapse.

To understand why, one must first rescue Trump supporters from caricature. Covering the presidential elections from Muncie, Indiana I was struck by how many of those who voted for him didn’t particularly like him. Among other things they described him as “garbage”, a “bully” and an “arrogant SOB”. “Unlike Hillary, at least he hasn’t done something criminal,” said one.

When I went back a year after his inauguration they still didn’t like him that much. “He just keeps opening his mouth and spews out word-vomit and I cringe,” said one. “He’s completely embarrassed the United States more than a handful of times.” “He’s like your drunk uncle at a party,” said another.

But to a person they thought he was doing a good job, pointing to his tax cuts, deregulation, supreme court nominations and stock market highs as evidence. As one woman put it: “He wouldn’t be someone I’d want to socialise with. I don’t appreciate his bad manners and his bullying. But I do appreciate his business and negotiating skills.” It was as though they had elected not a president but a CEO, and felt that you don’t have to like your boss so long as he keeps the company healthy. As Cathy De Grazia told the BBC: “I don’t care if he paid off a porn star or a Playboy bunny, that doesn’t impact his policymaking.”

This is new. The issue of “character” used to be key in US presidential elections, even if it was so extensively curated and carefully manipulated that Bush Jr emerged as the man people most wanted to have a drink with even though he was a teetotal recovering alcoholic. The fact that Trump could win despite boasting about sexual assault and his brazen appeals to racism illustrates that he did not create this state of affairs, but is a product of them.

That’s why comparisons to Nixon and Watergate miss the mark. If, in the 1970s, there had been Fox News seemingly acting as Nixon’s private channel and Facebook to disseminate whatever version of reality you like to those who think like you, then there probably would have been no Watergate. In normal times Trump would not be president. But these are not normal times.

• This article was amended on 24 August 2018. An earlier version said the gravity of the legal situation for Trump could not be underestimated. This has been corrected to overestimated.