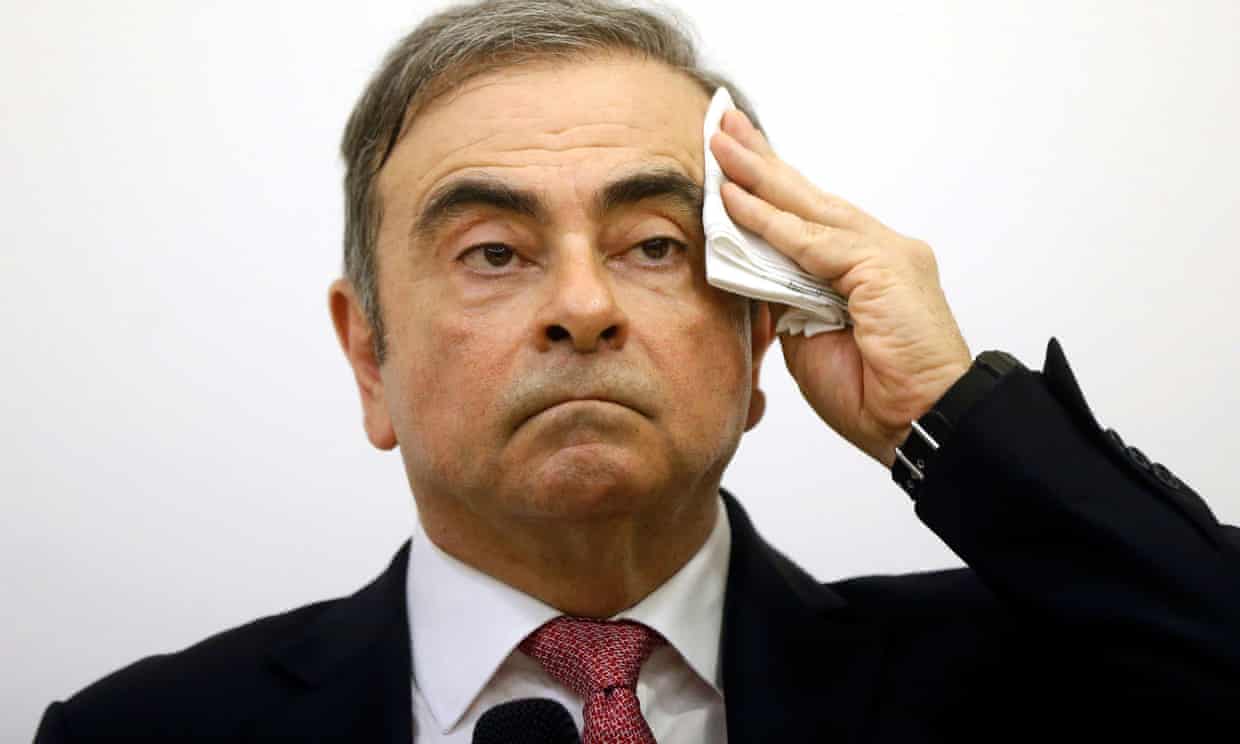 Why did former Nissan boss Carlos Ghosn choose a life on the run?
The Guardian,
Photograph: Mohamed Azakir/Reuters

The former CEO of Nissan, Carlos Ghosn, was once one of Japan’s most respected business people. Now, as the Guardian’s Justin McCurry reports, he’s on the run in Lebanon after fleeing the country to escape financial misconduct charges. Also today: Gary Younge looks back on the opportunities he had as he bows out after 26 years at the Guardian.

Stories in the business pages don’t often catch the eye of Hollywood scriptwriters. But the case of Carlos Ghosn is an exception. Over Christmas, the former boss of the Japanese car giant Nissan, wearing a disguise, reportedly hid inside a musical instrument case and jumped bail from financial misconduct charges in Japan to Lebanon.

The Guardian’s Justin McCurry has been following the story from Tokyo and watched as Ghosn broke cover at an extraordinary press conference last week from Beirut in which he called out former colleagues and the entire Japanese justice system. It now appears unlikely that Ghosn will ever face charges in a Japanese – but has he instead chosen the life of a fugitive?

Also today: as the Guardian’s Gary Younge bows out after 20 years as a columnist, he reflects on the circumstances in Britain in the 1990s that led to his opportunities – and why not enough has changed since.

follow on twitter
We’ll that’s awkward https://t.co/X7NN3QwZwl
RT @penvlaanderen: Vanaf 29 mei is Brussel drie dagen lang het toneel van het Asmara-Addis Literary Festival - In Exile. Op maandag 30 mei…
RT @sulaimanaddonia: A panel dedicated to writers & journalists around the world, and esp in Eritrea, who are being persecuted for their cr…
RT @PaulLewis: Thrilled to announce that the Guardian’s investigation team is expanding. We’re recruiting several new journalists, includin…
RT @sulaimanaddonia: So thrilled to announce our panels for DAY 1 of the AALFIE. On “radical interpretation of Europe through travel, mig…
Watch this space. @Lanre_Bakare is a real talent. https://t.co/nwbYqf7y7L
RT @guardianlive: Award-winning artist and filmmaker #SteveMcQueen, Tate Director @mbalshaw and sociologist Paul Gilroy will be in conversa…
RT @nyeusi_waasi: For 20 days, 8 African miners have been stranded more than 500 meters deep in a zinc mine operated by a Canadian company…
From 2019 https://t.co/R5sOe2P9jI
RT @sulaimanaddonia: Reminder: We have 80 FREE tickets for refugees/working class/Students/artists on low-income to attend our festival tha…
© Gary Younge. All Rights reserved, site built with tlc
Actonel pill price Avodart online canadian pharmacy How to get lioresal without prescription Singulair price usa Paxil cr best price Where to buy cheap astelin Buy zetia online with free samples How to get benicar online Where can i get lamisil cream Best place to buy motegrity online