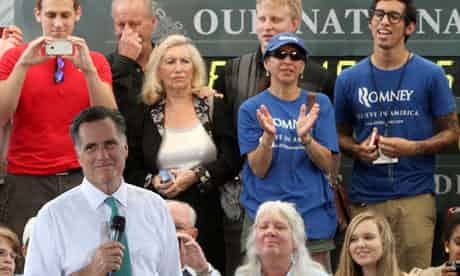 Why do poor white voters reject the Democrats? Well, why shouldn't they?
The Guardian,
Photograph: Mary Altaffer/AP

So white people who are struggling financially are going to vote Republican. And not by a narrow margin. Asked in a recent Washington Post poll which candidate would do more to advance their families' economic interests, middle-class white voters who said they were struggling to maintain their financial positions chose Mitt Romney. And not by a small margin. In this category he beats Barack Obama by 58% to 32%.

Such news is generally greeted on the left by a mixture of despair and ridicule. Here is a group of people, it seems, who simply do not understand what's good for them. Whites without college degrees, as reasonable if flawed an indicator of "class" in this country as exists, backed John McCain by 58 to 40 in 2008 and George W Bush in 2004 and 2000 by similar amounts. Failing to sense the liberation the Democrats have in store for them, they have been seized by a collective bout of false consciousness and are once again set to vote against their own interests. Having thus infantilised them as ostensible adults in need of protection against themselves, progressives will then wonder why this particular group of people do not flock to them at the polls.

There are several problems with this response – not least the condescension towards a group that too many liberals feel too comfortable disparaging – but for now let's just concentrate on two.

First, it interprets interests too narrowly. As a well-paid journalist, I vote against my economic interests when I support parties that favour wealth redistribution. That's because my own economic interests are not the only things that interest me when I vote. I have a vision of a society that I'd like to live in that goes beyond my own bank account.

It's patronising in the extreme to assume that poorer white people don't understand that. I may disagree with their decisions to vote on issues like abortion and gay marriage, but it's a different thing entirely to suggest that when they prioritise those things it's because they don't know what's best for them. Paradoxically, given that this argument comes from liberals, it is underpinned by an insistence not that they be less selfish, but more.

Secondly, if they were voting on economic issues alone, that might be a reason not to vote Republican but it's not necessarily a reason to vote Democrat. With unemployment still about 8%, many of the benefits of healthcare reform still to kick in and bankers still running amok, it's not like Democrats are offering much that would support the economic interests of the poor, regardless of their race. It was Bill Clinton who cut welfare, introduced the North American Free Trade Agreement and repealed the Glass-Steagall Act – which helped make the recent crisis possible. If you were going to trade your religious beliefs for economic gain, you could be forgiven for demanding a better deal than that.

Indeed, the people most likely to have voted Democrat four years ago – the young, the black and Latinos – are among the groups that have fared worse under Obama. And all the polls suggest they're about to do it again, albeit in lesser numbers. One could just as easily argue that they are the dupes. Democrats have no god-given right to the votes of the poor of any race and for the past 30 years can hardly claim to have earned them.

In a country where class politics and class organisations are weak, it's too easy to dump on the white working class as a bunch of know-nothings when the problem is a political class that is a bunch of do-nothings. That doesn't mean there isn't a problem here. When asked which candidate is most likely to advance the economic interests of you or your family, white people backed Romney 50 to 37 while non-whites backed Obama 71 to 22. That kind of discrepancy cannot just be put down to white people being better off.

Since the mid-60s Republicans have seen an electoral opportunity in appealing to the basest, racist sentiments of a section of the white electorate. What became known as the "Nixon strategy" aimed to use the dog whistle of racial symbolism – like "Welfare Queens" and "Willie Horton" – to draw white southerners into the Republican fold and peel off disaffected whites in the north too. It worked. Since the second world war, Democrats have won the presidency with the white vote alone only once – in 1964. One of the appeals for some whites of voting Republican is a desire to maintain whatever limited racial privileges they have acquired over the years combined with a fear that what little they have will be taken away by feckless non-whites and undocumented migrants. While in Nevada in 2010 I asked a white Republican without health insurance why she wouldn't support a candidate who might give it to her. "I never really got into that Obamacare insurance stuff," she said. "My mind is focusing 250% on this illegal immigration."

None of this means all Republican supporters are racist. But it does suggest they make their appeal on racial grounds and, as the poll shows, it is effective. But it won't be for ever. Whites will be a minority in the US in about 30 years. Republicans' appeal to Latinos is already pitifully low and has made several western states, including Nevada, New Mexico, Arizona and Colorado, extremely competitive.

Nonetheless, time and again during the Republican primaries Republicans evoked racial themes in the whitest places. "I don't want to make black people's lives better by giving them somebody else's money," said Rick Santorum in Sioux City. "I want to give them the opportunity to go out and earn the money."

"Right," said one audience member, as another woman nodded.

"And provide for themselves and their families," Santorum added.

The black population of Sioux City is 2.9%. In Woodbury County, in which Sioux City sits, 13% of the people are on food stamps, an increase of 26% since 2007, with nine times as many whites as blacks using them.

Just a few days later, in Plymouth, New Hampshire, Newt Gingrich said: "I will go to the NAACP convention and explain to the African-American community why they should demand paychecks [instead of] food stamps." African-Americans make up 0.8% of Plymouth's population. Food stamp use in Grafton County is 6% – a 48% increase since 2007.

Those who are struggling and believe Romney will improve their economic lot are wrong, regardless of their race. Eight years of George W Bush proved that. But it does not follow automatically from that that their home should be supporting Democrats under whom things have gotten less bad less quickly. True, those are the only two choices on offer. But if you're poor they are not great choices. What they need is a party that represents their interests. In a country where corporate money chooses the candidates and therefore shapes the debate that will demand a change in politics, not just politicians.