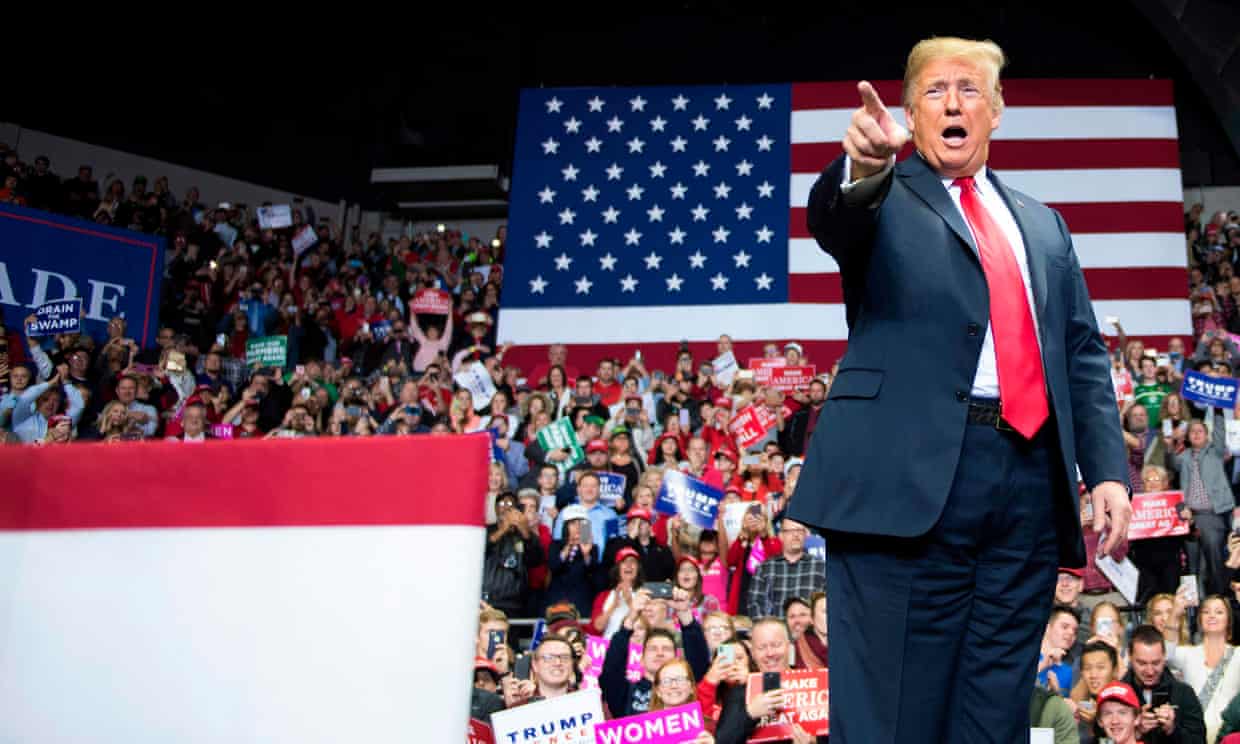 Why Trump’s pathologies make this election unlike any other
The Guardian,
Photograph: Jim Watson/AFP/Getty Images

Three weeks before the midterm elections the first of several mail bombs started arriving at the homes or workplaces of Donald Trump’s critics, including the media, and kept coming for a week. The devices appear to have been sent by an unstable man radicalized by Trump’s rhetoric. A few days after the first mail bomb was found, an armed man tried to break into a black church in Jeffersonstown, Kentucky. When he found the door locked he went to a nearby supermarket and shot dead two elderly black people. When a white passerby with a gun challenged him he reportedly said: “Whites don’t kill whites.”

The next day an antisemitic gunman entered a synagogue in Pittsburgh and shot 11 people dead at prayer. The gunman was at least in part motivated by the notion that, through its support of the Hebrew Immigrant Aid Society (Hias), the synagogue backed the caravan of Central American asylum seekers and immigrants coming through Mexico. Shortly before the attack he wrote: “Hias likes to bring invaders in that kill our people. I can’t sit by and watch my people get slaughtered. Screw your optics, I’m going in.” When he entered the synagogue he allegedly shouted: “All Jews must die.”

That afternoon, after a morning of carnage and a week of terror, Trump addressed a crowd in Murphysboro, Illinois. “This,” he said, “will be the election of the caravans, the Kavanaughs, law and order, tax cuts, and you know what else? It’s going to be the election of common sense, because most of it is common sense.”

But nothing much about this election makes any sense at all. It is unlike every other election here I have covered (this is my 10th) for three main reasons.

First, a range of pathologies – lying, demonisation, incitement to violence, bigotry – are being actively, openly and relentlessly encouraged by a political leader. Second, the much-anticipated consequences of those pathologies, including mass murder, is actually unravelling during the campaign itself while the polls are open. And third, it is not even remotely obvious that either of those things will have a decisive impact on the result.

The polarisation and the sense everything that America stands for is at stake is not new. While travelling the country in 2004 I met Pam and Patrick Devaney in Derry, New Hampshire, who described their shyness to go knocking on doors in search of progressives. “Our democracy is at stake. This is the most important election in my lifetime,” said Pam. A few days later I met Burton Kephart, in Franklin, Pennsylvania, whose son Jonathan was killed in Iraq. “I fear for this country if [John] Kerry [the Democratic presidential candidate] wins,” he said 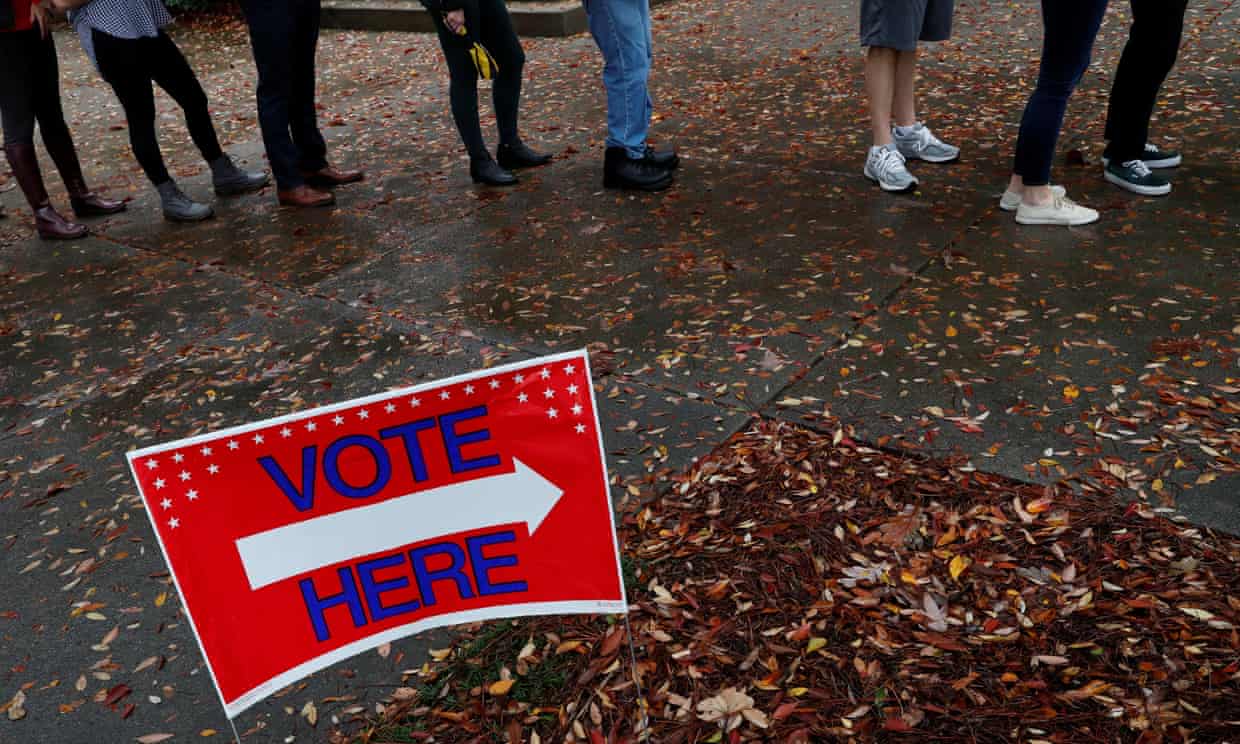 Voters wait in line to cast their votes in the midterm election in Atlanta on Tuesday. Photograph: Leah Millis/Reuters

But sentiments over the last two years have been far more raw than I’ve witnessed before. In the 12 years I reported on politics in the US I only had one person cry on me – Harold Davies, an African American from Chicago, who wept after voting for Barack Obama in 2008. In the last year I’ve had two liberals choke up: one as they spoke of their friend who has been detained, the other as they reflected on the general state of the country. When Republicans feel angry at the political situation, as they often did during the Obama years, they are more likely to talk about stockpiling weapons and taking up arms against the government.

But as angry as grassroots Republicans became their leaders were generally more strategic. Even as a majority of Republicans believed Iraq had weapons of mass destruction or that Obama is a Kenyan-born Muslim, its leaders were happy to allow such views to fester unchallenged with just a little bit of encouragement. In 2012 Mitt Romney repeatedly said he thought Obama was born in America but that didn’t stop him quipping when he came to his home state of Michigan: “No one’s ever asked to see my birth certificate. They know that this is the place that we were born and raised.”

In 2004, George Bush was happy to allow the Swift Boat veterans, who had ties to his campaign, to raise spurious questions about John Kerry’s military service in Vietnam. But once it had muddied people’s views of Kerry’s past he conceded: “I think Senator Kerry served admirably and he ought to be proud of his record.”

In 2008, the late John McCain refused to run ads linking Obama to his radical preacher, the Rev Jeremiah Wright, even as McCain benefited from the controversy and signed off on Sarah Palin claiming Obama was “palling around with terrorists”.

The strategy always included the caveat of plausible deniability. As Richard Nixon once told his chief of staff. “You have to face the fact that the whole problem is really the blacks.”

Trump has dropped all appearances, not just on race, but on everything. On the first day the mail bombing came to light he made an effort at being presidential. “Those engaged in the political arena must stop treating political opponents as being morally defective,” he said. In the following week he insulted many who who had received a bomb threat. He branded Tom Steyer, “a wacky, crazy, stumbling lunatic”; repeated the claim that Maxine Waters was “the most corrupt member of Congress” and claimed “it would be the beginning of the end” if the Democrats won and branded the media: “The true enemy of the people”. 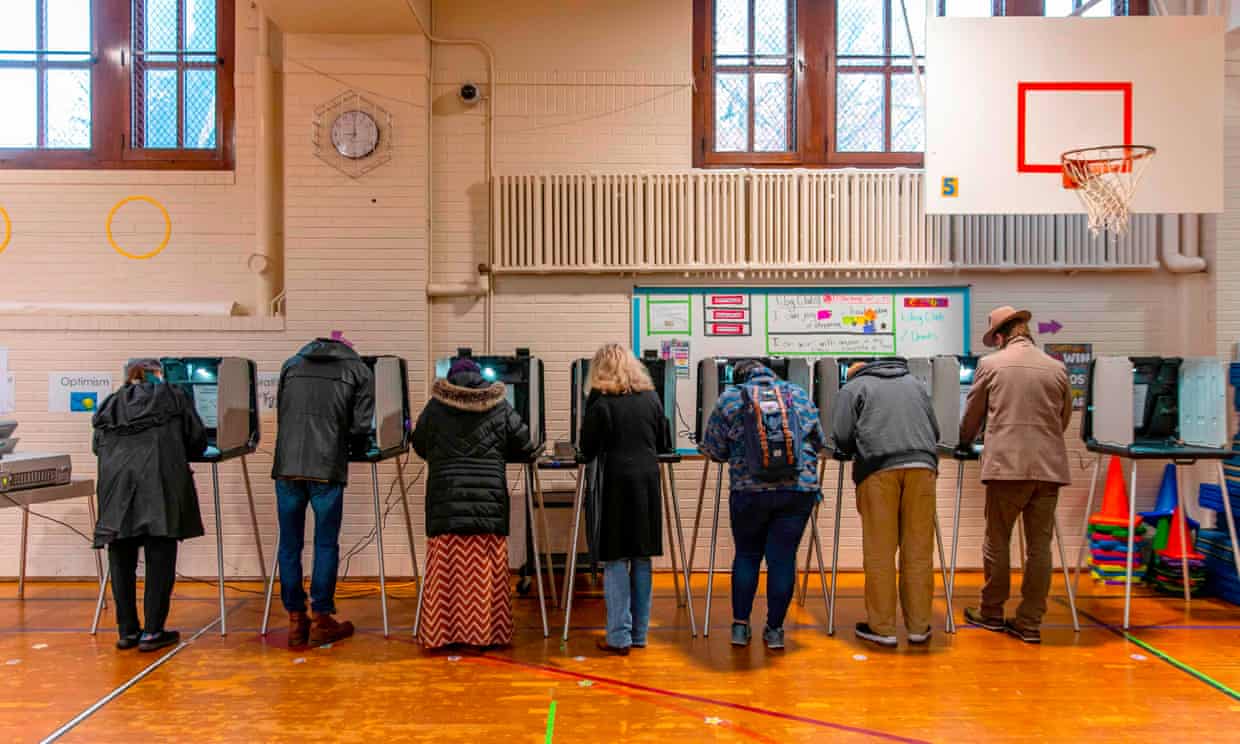 He did this at a moment when the link between his rhetoric and violence was not simply a notion about something that could happen, but was something that was actually happening now – even as early voting was taking place.

This did not stop him. After the synagogue shooting he repeated the myth that George Soros funded the caravan. His top team are no better. Both his son and other Republican congressmen helped spread the rumour about Soros while, after the mail bomb, the House majority leader, Kevin McCarthy, wrote this: “We cannot allow Soros, Steyer, and [Michael] Bloomberg to BUY this election!” (All three are Jewish).

In the meantime he has claimed there are people from the Middle East in the caravan (there aren’t); justified continuing to campaign on the day of the shooting by insisting the New York stock exchange opened the day after 9/11 (it didn’t open for six days); claimed there would be tax cuts before the midterms (there couldn’t be; Congress is not in session); promised to use an executive order to end the automatic right to citizenship for those born here (he doesn’t have that power); and that no other country allows citizenship on that basis ( 30 countries do). One ad he produced was so racist that NBC, Facebook and even Fox pulled it.

The result has been not so much Trump taking over the party as a realignment between the leadership and the membership. It recalls the moment in 2008 with Republican voter Gayle Quinnell. “I can’t trust Obama,” she told the Minnesota crowd and Republican presidential hopeful, John McCain. “I’ve read about him and … he’s an Arab.”

McCain shook his head and said “No, ma’am” several times before relieving her of the microphone. “No ma’am. He’s a decent family man, [a] citizen that I just happen to have disagreements with on fundamental issues.” With Trump it’s as though Quinnell grabbed the mic back and is now in the White House.

The assumption had always been that with an increasingly diverse electorate such a strategy would soon be unviable. Trump’s narrow victory suggested otherwise. Now they are doubling down. The economy is good, their man has delivered on taxes, deregulation and the supreme court. The polls are close. “We’re not generating enough angry white guys to stay in business for the long term,” Senator Lindsey Graham said in 2012. Tonight we’ll find out if he was right.